Motoring down the highway, who among us hasn’t experienced the obnoxious odor of fresh road kill? The worst experience I recall occurred late one hot and sunny July afternoon; with windows down of course. I was a teenager back then. There in the roadway and totally unavoidable, was the dispersed remains of the largest, bloodiest, boniest, and most foul skunk of all times. It was too late to roll the windows up so I stepped on the gas until fresh air cleared the stink from my vehicle. Wow’sa, wow’sa did that animal pack a powerful punch. I recall this vividly, although it has been many, many years ago.

Back then, my eyes watered profusely and of course I tried to hold my breath for as long as I could. Not long enough. Short quick breaths prevailed for what seemed like an eternity before the air cleared and then deep breaths to clear my lungs. My passenger did the same. Finally, and it wasn’t until sometime later, we dared to begin our conversation and to laugh about the experience.

So what reminded me of this? The most recent diatribe from Edgar County’s most beloveded Spandex Queen: and all in our county board meeting. Just as it took several minutes to clear the air and recover from the skunk’s stench of years past, it has also taken some time for the air to clear here in Edgar County such that I can comment on the most recent article (and pictures taken by the Spandex Queen). Note here, it’s been a few days.

In the interest of time, space and not wanting to either monopolize or repeat the same concerns over and over again, I’ve picked a picture or two to comment on as well as some closing thoughts.

One that I especially liked was the one of the of the fuel tanks, you know, the one in which there had been a bucket of trash out there for 10 months or so. What’s striking, is that whatever bothers the Ms. Bennett…it’s naturally something that Rusty has done or not done and never the result of the total incompetence of the airport manager. Ask yourself, would not a responsible airport manager have dealt with that issue long before this time: regardless of whose trash it was?

Yep, I think so. The bottom line here comes in two very distinct messages. First, Jimmy is not doing his job and probably never has. He’s content to allow these things to exist as an eyesore and a reflection on the county rather than accept the manager’s responsibility and do something about them. Maybe he’s just too stupid to know the difference. Second, since he is so totally incompetent Chris had to call in the third string player and favors; obviously owed to him to raise the issue. All the while unwittingly focusing the spotlight on the incompetence of Jimmy, Adonna and himself. Did not these containers exist 10 months ago, and who was overseeing Jimmy’s performance back then? Were not all of these issues of her concerns in existence for any number of years and never mentioned until now? So why now?

I also liked the picture of the Barron. There’s some real history. That plane sat for years in the general aviation hanger and was so far behind in its rent I believe the sheriff actually has custody of it as we speak. Perhaps the same standard Ms. Bennett, her bosom buddy and his posse would like to apply to Rusty should also be applied here. The plane doesn’t appear to be current in registration with the state (not required by the FAA, but it’s her issue), current rent, current insurance and no one has mentioned if the planes insurance policies have named Edgar County additionally insured. Who really knows if the plane ever had insurance, in what amounts and who really owns the aircraft? Another question, did not this issue exist 10 months ago and who was overseeing Jimmy’s performance back then? Chris? Were not all of these issues of his concerns in existence for any number of years and never mentioned until now? So why now? Better yet, why is RSB Aviation being singled out?

What about RSB property stored in his T-hanger, a hanger rented separately from the main hanger, and totally separate from the Main hanger? Does the Ms. Bennett, in her official Edgar County Capacity have the right to target RSB Aviation, to trespass on his properly rented space and to publicly disclose his private property? Is making this a public matter (if it were a valid concern) rather that a discussion in a closed session now disclose the availability of assets to competitors or thieves? You bet.

Does she have the right to trespass without the owner’s permission? No. Is she a liability for the county, and will her personal insurance indemnify the county for her actions? Is the county named additionally insured? I don’t think so, let’s just mark that as another no.

This entire matter goes beyond reason and comprehension. One, that our Ms. Bennett can portray herself as honest, upright and reputable in public. But that’s another thing. And two, that anyone can possibly allow her diatribe during this past board meeting. In retrospect, perhaps those on the board that sat through that awful barrage will show some leadership by getting rid of Jimmy, Lisa, and Adonna (Edgar Counties Spandex Queen) as expression of their outrage.

Which brings me to a quote of a respected economist, Peter Drucker, that I’ve recalled after all of these years “There is nothing so useless as doing efficiently that which should not be done at all.” Hence the airport lease. What really was wrong with it? Sure, you can point at it’s many inadequacies, but then again, it was working and even continues to work at the airport for others to this very day.

I would argue and as time and logic would suggest, the reason for the lease discussion and the re-writing of the lease at this particular moment: is one that is intended as a mechanism in which to throw someone off of the airport rather than one in which to correct any errors or oversight. And it’s worked to a great degree. It also hasn’t cost Chris the first dime to do this. And in the words of the Beacon News, the saga continues.

It has however, conveniently allowed the meddling appointees, past girlfriends and those without scruples to interfere, to provide misinformation, to miss-direct good will and to miss-lead those interested in good government.

It’s becoming clear to me; the absence of civil suits or intervention by our local state’s attorney (Mark Isaf) has caused a favorable environment for matters such as these at the airport to be fostered and protected.  A malignant and cancerous growth of local government fostering disrespect of what we now call Edgar County Government. The inaction by our state’s attorney and others perpetuates the local notion that laws are of little consequence here in Edgar County or anywhere else for that matter when they are not enforced. How can it be that a public official, speaking as a public official, be allowed to voice herself as a public official in this manner?

Now for the fish – Does anyone find it odd that pictures of airplanes, aircraft related diplomas and certificates are a problem, but a big ugly nicotine-stained fish hanging on the wall is perfectly acceptable in a Pilot’s Lounge? See pic below: 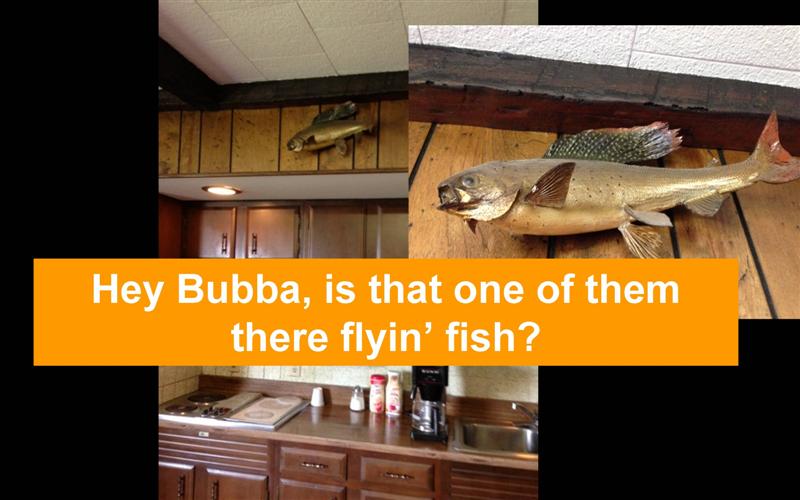