You Paid For It! – City of Paris Revolving Loan Fund – Golf Course –

In all of the recent reporting of conflicts of interest, we decided it is time to publish our discoveries obtained through City of Paris FOIA requests. These requests were pinpointed to included information concerning the asphalt road and parking lot at the former Sycamore Hills, Inc. Golf Course (now called Eagle Ridge Golf Course) prior to the new owners purchasing it out of loan default. Please keep in mind this has nothing to do with the current owners.

The timing of the asphalt work was suspicious to us as we found it strange that the then-owners would opt for new asphalt just a couple months prior to defaulting on their loan at the bank.

The asphalt project for the road going into the golf course was financed through the revolving loan fund, which was a Grant and does not have to be paid back. So basically, the taxpayers got shafted for that one. Aren’t you happy you could help throw away over $240,000!?

Through numerous FOIA request with the City of Paris, I could never get a straight answer on the timing and financing of the parking lot at the golf course. I kept getting the same answer: “We gave you all the information on the road.” They even insisted the parking lot was not paved under the same project as the road, but we know it was – not technically, but the road and parking lot project were timed and prepared by the same people, and paved at the same time.

Why does this matter?

Simple. The road was “given” to the city in order to get it paved. The parking lot is still private property. Who do you think got the survey contract after the board he sits on approved the grant? You are correct, Bob Colvin. He sat on the board that approved the grant, using public funds, then turned around and contracted for the survey work for the project. His company, Francis Associates pulled in well over $35,000 on that project alone.

Fall 2009 – Sycamore Hills is failing again and Mr. Neal from Charleston is contacted to take care of the course until it is sold
Jan 2010 – Mr. Neal receives an offer from First Bank asking him to buy the course
Feb 4, 2010 – Paris Revolving Loan Fund Committee meeting discussed the Golf Course
Feb 8, 2010 – Resolution of Support and Approval passed by Paris City Council to utilized Revolving Loan Funds with Sycamore Hills CC
Feb 2010 – Contracts are drafted, which include “donating” part of the property to the City of Paris to use as a public road
Feb 2010 – A Revolving Load Fund (RLF) grant is approved in the amount of $242,000 to Mr. Neal for the sole purpose of repaving the road (although that’s not what the paperwork said).
Feb 2010 – A loan is secured from Paris First, with a balloon payment at the end of 3 years, contingient on the road being “improved” by the City of Paris, and a promise of $175,000 operating cash
May 13, 2010  – Drawings for road resurfacing signed and dated
May 15, 2010 – Notice of bid for road resurfacing published in the Beacon News
Jun 14, 2010 – Bob Colvin signs a Bid Tabulation Sheet for “City of Marshall – Sycamore Hills Country Club Entrance Road Resurfacing”
Jun 28, 2010 – Contract awarded to resurface entrance road to Sycamore Hills Country Club @ $22,487.70 (Source: Minutes)
Jun 29, 2010 – Agreement signed Between City of Paris and contractor for $220,487.70

So, the City was wanting a grant to improve the road, and Mr. Neal agreeed to purchase the golf course based on the city improving the road. Then, the city apparently scratched the idea of the grant they were attempting to acquire, and instead gave Mr. Neal a grant from the revolving loan fund – a fund paid for with your local tax dollars.

When the project was completed, it included the (still private) parking lot and the road, with no extra money being spent for the parking lot above what the engineer’s estimate was for the entrance road. Convenient little operation they had going on, wasn’t it? It kind of make you wonder whether the purpose of the quick sale to Mr. Neal, and the later refusal to release operating funds, were simply a scheme to shaft an “outsider”, give away public funds to pave the raod and parking lot, force him into foreclosure, then have an “anonomous group” of local people “donate” money to help purchase it back at the auction, and them give them more public funds in the loan amount of $300,000 to help them with financing the purchase. 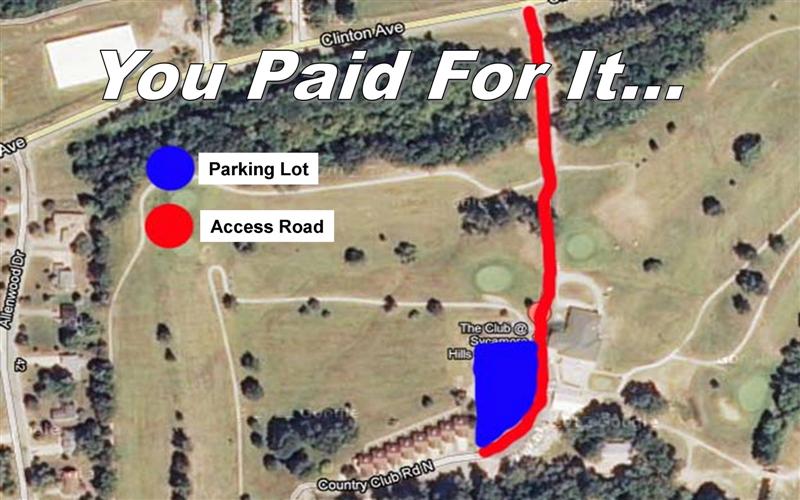