Among the items on the Agenda are:

1.  Act on resolution giving the vice-chairman (Ben Jenness) authority to sign agreements on behalf of the chairman (Chris Patrick).

2. Act on resolution for the County Engineer to report to the Road and Bridge Committee and Motor Fuel Tax Committee Chairmen.

We know that IDOT has already rejected the idea of item #1.

Mr. Patrick, allowing someone else to perform your duly elected duties I believe is official misconduct:

(720 ILCS 5/33-3) (from Ch. 38, par. 33-3)
Sec. 33-3. Official Misconduct.) A public officer or employee or special government agent commits misconduct when, in his official capacity or capacity as a special government agent, he commits any of the following acts:
(a) Intentionally or recklessly fails to perform any mandatory duty as required by law;

We believe item #2 is to try and convince IDOT that the Co. Engr. does not work for Chris Patrick - except that resolution goes against what the statute says:

(605 ILCS 5/5-205) (from Ch. 121, par. 5-205)
Sec. 5-205. The county superintendent of highways shall, subject to the general supervision of the county board and to the rules and regulations of the Department, perform the functions stated in the following Sections preceding Division 3.

This resolution would restrict all county board members except the Chairmen of the Road & Bridge and Motor Fuel Tax committees from performing their statutorily given duties.

Who do you think you are? This isn't just about the elected officials, but this also takes the rights of the Public away - that right of being represented by the very people they elected!. 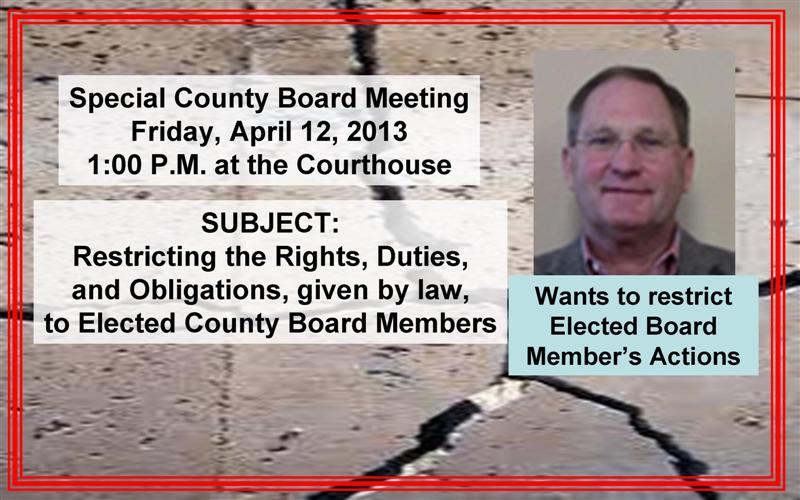