Wrong again? I Think Not!

I reported in this article that I suspected the response to my FOIA to the county for the 3 remaining mysterious letters Mr. Patrick claims he sent to IDOT are going unanswered was going to be that there were no other letters.

Was I wrong in that reported suspicion?

The response I got back from the county clerk, found here, is worthy of the entire county calling Mr. Patrick out to produce the records!

Kirk,
I am not in possession of those letters, nor have I seen them. After talking to Mr. Patrick yesterday, he said that he does
not have copies, and suggested that you send your FOIA request to IDOT.
Augie

Really Mr. Patrick?  You expect us to believe that you sent 3 other letters to IDOT over a potentially criminal violation and you don't have copies?  You tell the County Board that IDOT has ignored your letters yet you don't have copies to substantiate your claim?  No one seems to have seen these mysterious letters he claims are being ignored yet he is insistent that IDOT is the problem.

Maybe Mr. Patrick should have listened to what I said during the county board meeting, which was basically; my FOIA to IDOT has ALREADY Confirmed there were no other letters sent besides the one from Craig Smith.

Or maybe read in the last article where I stated: "My FOIA from IDOT has confirmed the only letter sent was the letter from Craig Smith, so clearly someone is lying."

Can anyone in this county believe a word Mr. Patrick says?  Does anyone believe for a second that a businessman who potentially is jeopardizing the loss of a huge amount of business wouldn't make a copy of letters he is sending to IDOT officials that were sent in an effort to justify his staying in office?

What drives a person to refuse to turn over public records unless they have something to hide?  From self serving profiting as Airport Chairman to mysterious letters to secret bank accounts and checks written to someone, it all circles around County Board Chairman Chris Patrick who to this day has proven We The People can no longer trust our elected officials.

Its time for each and every person in this county demand that the States Attorney take action against Mr. Patrick.  If you concur, contact his office at 217-466-7456 and express your concerns.  I would also encourage you to contact your County Board Members and demand them to stand up and insist the public's right to records be enforced.  Don't stop with the Board Members though!  Your County Treasure is responsible for all funds in this county and he too should be demanding an accounting for who the $14,101.08 of taxpayer money went to!

This on-going disregard for our laws must be stopped! 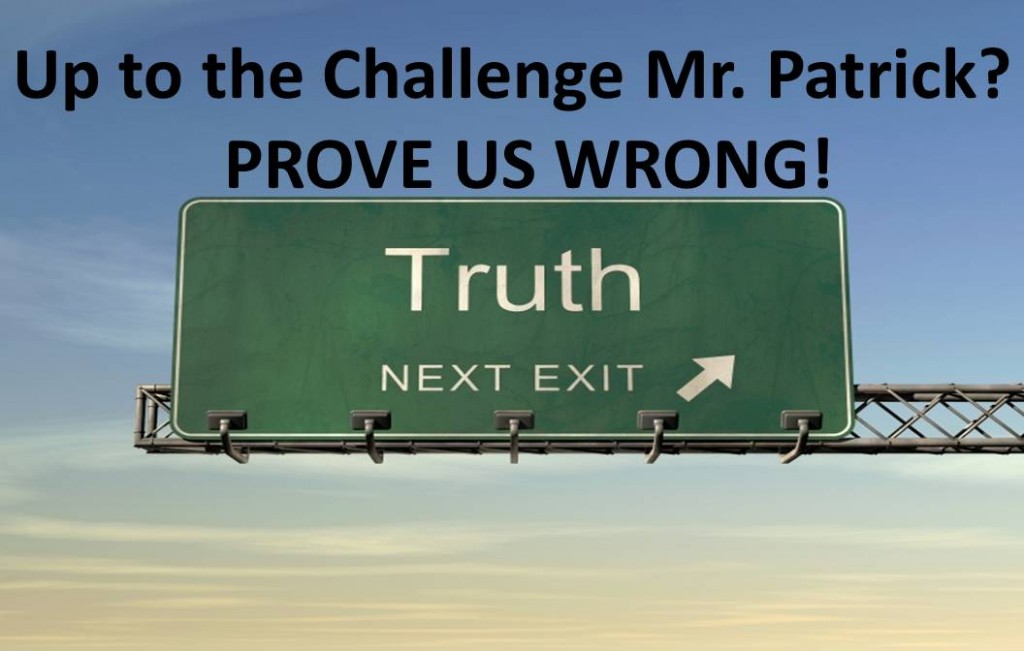