After numerous attempts at obtaining public documents from the Airport Manager, Mr. Jimmy Wells, it has become clear that compliance with the Freedom of Information Act is not going to voluntarily happen any time soon.

After several attempts, including speaking to 4 Airport Board members about the issue, the only option remaining is a civil suit seeking access to public records. I say the only option remaing because previous Requests for Review through the Attorney General’s Office have been taking anywhere between 3 months to more than 18 months for resolution.

From February 8, 2013:
-I submitted 2 different FOIA requests for rent receipts of particular pieces of Airport Property – request left unanswered until after the civil suit was filed, when answered there was incomplete information and an alleged altered public document (being dealt with thru another venue).

From February 25, 2013
-I requested a copy of a $14,101.08 check written out of a “Secret” public Airport Advisory Board checking account that was set-up by Jimmy Wells and Chris Patrick – without the knowledge (at least nobody admits to knowing) of any other public official in the County. The secrecy surrounding this checking account and the 1 check written is astounding! Why the big secret? Did it go somewhere it was not supposed to go? If it didn’t, then simply produce the document or anything else that accounts for where the money was spent.

When questioned in numerous Public Meetings about the checking account and other items, the answers we obtained were anything but cooperative. Answers like: “I don’t feel like giving you a copy“, “No comment“, “What business is it of yours“, “The Airport is growing – I don’t care where the money went“, and “Good luck getting a copy” are among those stated by Chris Patrick and others as late as this week.

No Other Viable Option

These statements left me with no other viable option but to initiate a civil suit seeking recovery of the documents and civil penalties. This will come at tremendous cost:
-To the Edgar County Taxpayer who is ultimately footing the bill for public servants that violate the law.
-To the State’s Attorney – taking up valuable time that could be used elsewhere – unless he agrees that they were wrong in the FOIA denial, in which case he is not obligated by law to defend the suit and can tell them to hire their own attorney at their own personal expense.
-To me for having to spend numerous hours typing, researching, and filing the suit – which will be paid for by the Edgar County taxpayer in the end, should the Court rule in my favor.
-In civil penalties that range from a minimum of $2,500 to a maximun of $5,000 per incident, and there are 3 of them in this suit.

Due to the refusal and inaction of the County Board, Airport Board, and Airport FOIA Officer, these extra costs will be forced on the good citizens of this county. All of you should be outraged that the public officials involved have chosen to go this route, instead of simply providing a few pieces of paper.

You can read the Complaint here: 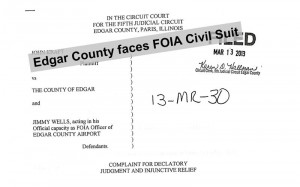