This standard business lease is to be used for all busineses operating out of the Edgar County Airport, this would include the following should they operate from this airport:

I just hope that in the formation of the new lease, this is all taken into consideration prior to its approval. It is a requirement that all businesses and rentors be treated fair across the board, and even fair in relation to other comparable public airports. Other items to consider would be to make sure this lease is comparible to other leases the county has - IE: Farm Leases, etc...

In another fit of desperation, Jimmy Wells decided to chuck some more stones into the mix. This time he brings up the "issue" of not having enough hangar space to conduct "County Business" in since RSB is rented 3/4 of the big hangar.
-What "County" business are you talking about?
-Why was this not an issue when you, Jimmy, had your personal airplane in there for well over a year, without paying any rent?
-What is the issue with it now?
-Was there not enough space to take the snowplow off of the tractor in the middle of the winter?
-Jimmy, you blamed Rusty for you "kicking" out another renter to give him more space - maybe if YOU didn't have your personal airplane in there rent-free that wouldn't have been an issue? - I don't think it happened that way at all...

Yes, Mike Heltsley has eluded to a Socialist money grab by eluding that maybe a successful renter at the airport should have to share part of their profits because he thinks the business should pay their fair share, as if rent is not enough.

Mr. Heltsley, do you honestly think the county has a right to reach into the pocket of a private business and take a portion of their profits because they are successful while operating out of the county Airport?

Fair Share?  I have never heard a more anti-business statement in my life.  Such a policy to reach into the pocket of any private business if they use public investment, in this case the airport, is nothing short of a Socialist stepping stone to take more money from business pockets that does nothing but destroy capitalism and free enterprise.

Would you apply the same logic to the farmers leasing the farm ground?

Lets apply Mr. Heltsley's thoughts to his employer and see what they think;

Mr. Heltsley, you stated in your deposition the following:

"I work for a company, a construction company called Thompson Thrift.  I manage the two principals that own the company, I manage their farm and their households."

Since you manage the principals that own the company, what ever that means, and also manage their farm and households, would it be fair for them to have to share their profits with the state since they use public investment, in this case the road, to transport goods and services to grow their business?

Hey Mr. Heltsley, should the farmers pay part of their grain profits to the county just as you have implied might be a requirement for RSB Aviation?

The questions generated from Mr. Heltsley and Adonna Bennett, as it relates to insurance and the risk of the county being sued paint quite the picture of an agenda, more than likely being fueled by Chris Patrick.

If their concerns raised in this meeting are truly a concern, may I suggest that they take a hard look at other lease holders with the county.  The language in the Ambulance contract is very clear and good enough for addressing concerns from a liability standpoint so why not use the same language?  If it's good enough for one contract why not good enough for RSB Aviation?  Applying a different standard very well could open up the county for a law suit for not applying a fair standard, which by the way is a FEDERAL requirement.

A side note that pretty much proves their claimed concerns of law suit have no validity, is the fact there is no language in the leases for the farm ground that require anything as it relates to insurance.

Never again, will civilization need to invent a hypothetical model of extreme ignorance for the purpose of gauging man’s evolutionary progress from that of a single biological cell. We now have Jimmy, Chris,  Adonna and Mike to thank for that! 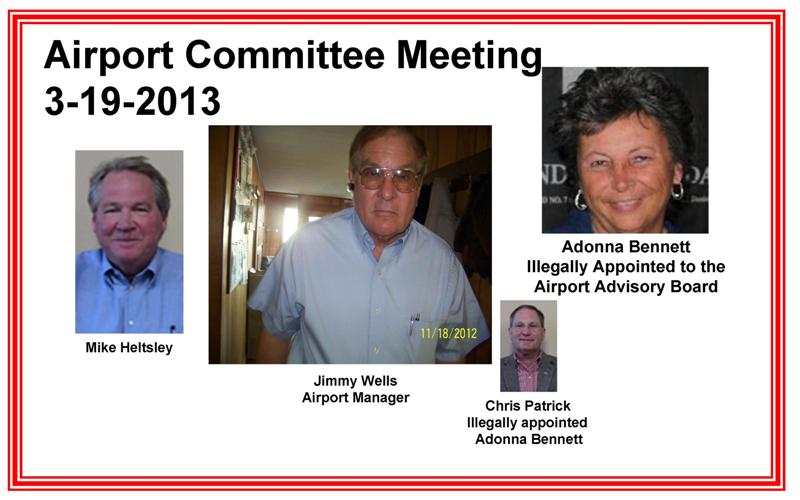