“I was referred an inquiry from the County Board to investigate…”

If a person is “truly” going to investigate something don’t you think the very beginning of that investigation would be with who ever drafted the Contract?   I know that over the last two years, the one thing we have learned in trying to understand the statutes was when at all possible go directly to the source of who drafted it and talk to them.   There are plenty of sources on the creation of the laws and the intent when they were drafted and passed.

So the most amazing part of this is the excuse that the two lawyers involved in the contract in question were never spoken to because they are now judges, and the only way for them to speak on something that might go into litigation would be with a subpena.    So in short, because they have been elected to serve the people we can’t get to the bottom of the truth on behalf of the very people they serve and answer to.

I don’t believe anyone in this county thinks that Judge Garst or Judge Sullivan approved a contract that was so clearly written to require a payment of $100,000.00 to mean that they really didn’t mean for Burgin to make the payment.

If the intent was ANYTHING CLOSE to what Mr. Isaf is claiming in his opinion, wouldn’t  those two educated people have just written it such that Burgin didn’t have to make a payment?  No, they would not, they didn’t write it that way because they KNOW that would be totally illegal!

Under the common law, a binding contract must involve consideration: that is, the exchange of something of value for something else of economic value. In the United States, if the exchange appears excessively one sided, courts in some jurisdictions may question whether a quid pro quo did actually exist and the contract may be void by law.

After speaking with DOZENS of attorneys about this contract in question, they all concluded the same as we have, you can’t give county property away and not get something in return.

Under this purchase agreement, WHAT did the County receive in exchange for all the property that was given to Mr. Burgin?

Then Mr. Isaf states “furthermore, this inquire is not conducted to review the decision of elected officials exercising their discretion on behalf of Edgar County in 2003.”

Is that his way of saying even if they broke the law they get away with it because it was not part of his inquire?  Isn’t that a cop out?  I’m going to look at this one thing, but if I find anything else that might be against the law I am going to ignore it because that was not what I was looking at to begin with.

Mr. Isaf, your job is to Seek Justice, not merely convict!  Again, don’t take my word for it, read it for yourself on page 109!

While listening to the closing arguments of the Terry Payton trial today Mr. Isaf referenced a phrase commonly used in the legal arena.

Reasonable inferences mean “conclusions which are regarded as logical by reasonable people in the light of their experience in life.”

I find it amazing that he wants the jury, rightfully so, to make a judgment of guilt or innocents, which may lead to a life sentence for a 16 year old kid, using Reasonable Inference, yet that very same principal is not being applied to a simple contract.  Anyone in the business world or familiar with contracts, (“life experience”), has reasonably concluded that the Contract Dee Burgin entered into with the county clearly established an obligation to pay the county $100,000.00.  “Shall Pay to the Seller” is not a phrase a lawyer puts into a contract and then tries to imply it means they shall NOT pay to the seller!

The county tax payers deserve to have full recovery of the funds rightfully owed to them.  That is justice.  The excuses delivered to the people of this county by Mr. Isaf, in regards to the Ambulance scam, is a clear example of just how broke our system of government really is.

Voice your demand for accountability to your tax dollars by attending the next County Board Meeting at 9:00 am in the Court House on March 13th, 2013! You have a RIGHT to speak and are allowed 5 minutes of time according to the current policy the County has for Public Meetings. 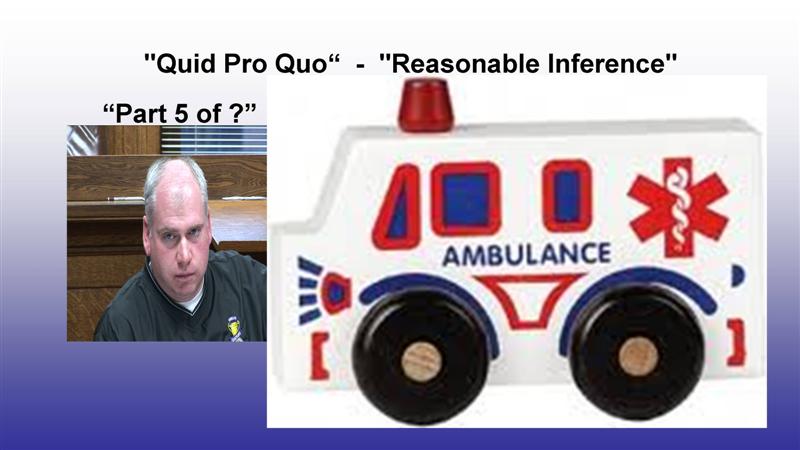