To better understand some key statements made by the auditor and those made by the State’s Attorney, you need to first figure out the differences between the “Purchase Agreement” and the “Service Agreement”.

It’s not too difficult – the Purchase Agreement included everything agreed to, by both parties, for Dee Burgin’s purchase of the Ambulance Service from Edgar County.

The Service Agreement details what level and types of SERVICE that Burgin was obligated to provide in return for the Ambulance District Tax Levy funds. These two agreements have nothin in common and are not interchangeable.

A “Purchase Agreement” is just that, an agreement on the terms to purchase something, and in this case, the Edgar County Ambulance Service. This purchase agreement clearly states a sale price of $100,000 with a more detailed list of ALL assets in Exhibit A. Nothing in that exhibit claims the bank account, and the money in it, as an asset of the Ambulance Service.

The service agreement lays out the type and amount of service to the district that the privatized ambulance service will provide in return for levied tax dollars. Nothing in the service agreement refers to the Ambulance Service bank account as being an asset sold to Burgin – except that the county will pay over to Burgin any funds in the account IN EXCESS OF $100,000, FOR OPERATIONS, which is an expense allowable under the statute!   Keep in mind, still no mention of ownership of the remaining $100,000, and there was no need to mention it as tax money is not to be used in such a fashion and those funds are reportedly still on hand as asset of the county.

Mark Isaf’s written opinion , at the bottom of the first page, blurs the line between the Purchase and Service Agreements. On one had he states the purchase agreement sold the ambulance service to Burgin for $100,000 – and on the other hand he states the bank account, with our levied funds of $100,000 was intended to be the payment for the purchase agreement – in effect GIVING him the service, plus an additional $33,599.00, just to “take it off our hands.”

Effective October 1, 2003, in consideration of $100,000 and the assumption of all assets and liabilities, including a $293,316 real estate loan, the County turned over the operations of the ambulance service to buyers Dee E. Burgin and Lisa L. Burgin d/b/a Edgar County Special Service Area Ambulance, Inc. Per a new agreement September 1, 2005 to August 31, 2010, the Special Service Area No. 1 Ambulance District will pay back the $100,000 by making monthly payments at $800 per month at zero percent interest. The amount owed at November 30, 2010 is $-0-.

This is a fabricated statement – why it was put into the audit we do not yet know. We assume it was a CYA move by the county board during this time-frame to try and deflect any attention away from Burgin and the board.  The auditors could not have come up with this statement on their own because the documentation doesn’t reflect anything even remotely close to the statement placed in the audit.

The next article will break down the other service agreements along with the repayment of the “missing” $43,000 from the county owned bank account. 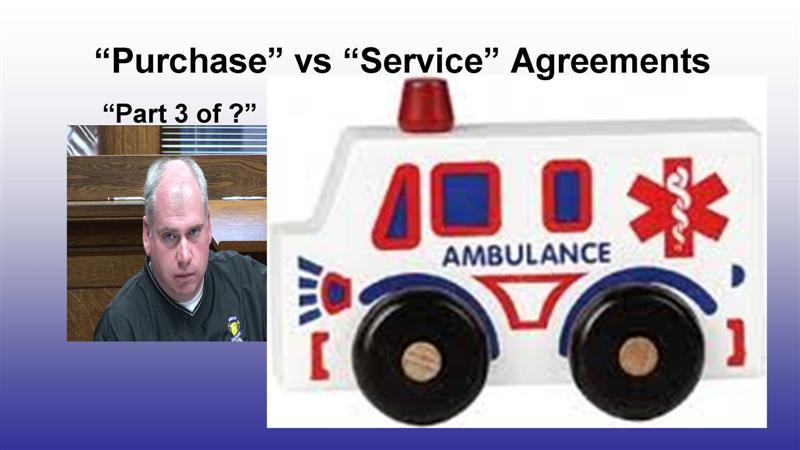