As mentioned in in this article, I tried for months to meet with Mr. Isaf on these issues since I knew when the facts came out they would be very embarrassing for him as his written opinion is going to be torn apart with truth.  Sadly, he refused to find time to hear the truth.

The Truth Has No Agenda

For everyone in the business world, this is the part where your eyes should pop out as it makes absolutely no sense, defies logic, and violates law, yet the State’s Attorney, Mark Isaf, found the actions to be “typical” for a business being purchased.

The position Mr. Isaf has taken is that since Edgar County had collected the people’s money (taxes), that income is an asset of the Ambulance Service, which totaled over 100K in the bank. A total list of assets was specifically spelled out here (26mb file) and interesting in that list, buried in the middle of all the pages, was what is now page 1 of those exhibits, is a brand spanking new Ford Excursion that Mr. Burgin ordered the month prior to buying the ambulance.

Mark Isaf’’s brilliant business mind concludes that since Burgin was buying the ambulance service from the county, it would include ALL the assets to include the peoples Tax money currently in the possession of the county. He even stated that those funds are an asset and that is “typical” for a business being purchased!

First major problem, Mr. Isaf, with your illogical logic is the very tax money in question was taken from the taxpayers with a specific instruction on how it was to be used By Law!

Tax for emergency ambulance service; referendum. In any county which is not a home rule county, a county board may levy and collect, annually, a tax of not to exceed .25% of the value, as equalized or assessed by the Department of Revenue, of all the taxable property in the county not included within the territory of a fire protection district which levies a tax for ambulance service, for the payment of expenses not paid for from general funds which are incurred in providing emergency ambulance service under the provisions of Section 5-1053.

Pay for the expenses incurred in providing such ambulance service under this Division from the general funds of the county or from the proceeds of a tax levied and collected annually under the provisions of Section 5-1028.

That referendum had specific guidelines for its use and those guidelines are spelled out by statute as is the law specific to the county’s options for an Ambulance service. As we have proven time and time again, the county only has the power granted by law!

Our Tax Money IS NOT a Negotiable Asset for Sale Mr. Isaf!

I challenge ANYONE to find one shred of documentation that reflects that tax money can be a negotiated asset for sale when that very money was taken from We The People with a referendum outlined by law that spelled out how it was allowed to be used.

Prove me wrong with documentation and I will drop this issue. Can’t prove me wrong, DEMAND Dee Burgin PAY what is rightfully owed to the people of this county!

As if the law is not enough to prove Mr. Isaf dead wrong I took the liberty of speaking with dozens of business owners and former owners who sold their business.

Mr. Isaf, I can’t find a single business owner, nor could they, who work to earn a profit, then decides to sell, and take the position that as long as they get to keep their hard earned profits they have in the bank, the buyer of their business doesn’t have to pay for every other asset they have earned in their business.

Mr. Isaf, your opinion not only holds no logic, but it blatantly falls on the face of any “typical” business transaction and is completely contrary to the very wording in the contract that clearly spells out EVERY asset, of which the $100,000.00 in the county treasury was not listed as an asset because neither Judge Garst nor Judge Sullivan are that stupid to think you can SELL tax money!

You can’t negotiate the “SALE” of the people’s tax money!

You can only use it to pay for the expenses related to its operation or contracted operation, but in no way, shape, or form is it an asset that is allowed to be sold outright from the public! The very named “Exhibit A” in the purchase contract specifically states it is a more complete breakdown of ALL assets being purchased and their assigned value.

Sadly, as is clearly typical with our elected officials, none of them read that Exhibit. Had they, they would have seen very quickly that not a single value was assigned to any asset listed in that very detailed exhibit.

All that aside, the language in the contract clearly states that the “buyer SHALL PAY to the seller the total sum of One Hundred Thousand Dollars.

Mr. Isaf, your legal opinion that there was no need for Dee Burgin to Pay $100,000.00 because the county had $100,000.00 of tax money for the ambulance, and in a typical business transaction that would be an asset truly concerns me on your ability to provide legal service to the people of this county.

Here you go Dee! You don’t have to pay ANYTHING even though the contract says you Shall Pay, and for being such a great guy who ran our ambulance operation so well it was costing us money we have full faith that you can turn this into a viable business if we basically just GIVE you everything for nothing!

That’s right, NOTHING! Mr. Burgin made NO PAYMENT under the Purchase contract and for signing that contract he took possession of the entire county operation and every asset listed on the Purchase agreement.

And yes, Mr. Isaf, attorney at law, current State’s Attorney, thinks that was OK because he considered your tax money as a negotiable asset that could be sold. 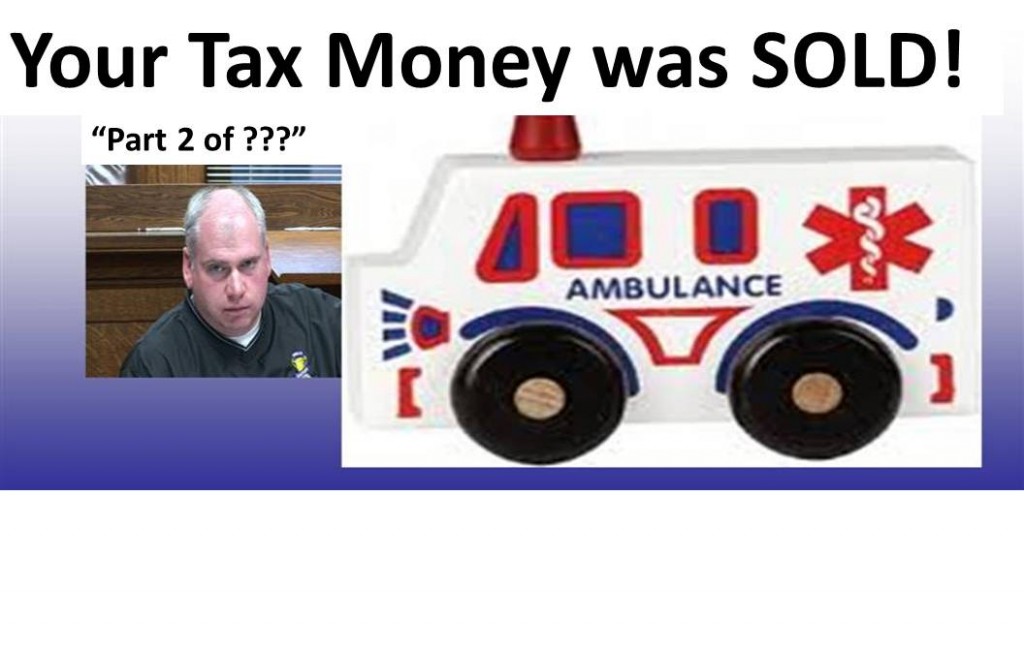