Words from Sir Walter Scott:
“Oh! what a tangled web we weave
When first we practice to deceive.”

During a search for information on the Certificate of Deposit gifted to the Airport (article coming soon!), which so far the County has failed to provide a copy of, I came across a very interesting and troubling note in last years’ County Audit. It relates directly to this article we ran over a year ago on Dee Burgin and the fact he NEVER paid for the Ambulance Service he acquired from the County.

For over 9 months I have tried to speak with Mark Isaf, the Edgar County State’s Attorney, to share documents pertaining to the Ambulance scam in hopes that the BROKE county would see the light and realize they could go after the $100,000.00 for the sale of the Ambulance as it’s NEVER been paid!

Instead of meeting with me, Mr. Isaf wrote an opinion on the whole transaction that is in direct conflict with documents in hand, but more importantly, in conflict with the very Audit performed by the CPA firm last year.

In order to explain everything on this whole transaction we felt it would be best to break it down in numerous pieces as it’s clearly confusing when looking at it in its entirety, which I suspect was intentional!

Was Dee Burgin required to Pay anything for the Ambulance?

That is the underlying question and it’s very clear now, we have three different opinions on the matter, of which only one has the paperwork in hand and challenges anyone to disprove our position in public!

“…That the Buyer shall pay the Seller for all of the ambulances, ambulance equipment, other supplies, including furniture and fixtures, bad debt account and outstanding patient accounts, the total sum of One Hundred Thousand Dollars ($100,000)…”

Can anyone explain how a State’s Attorney draws a conclusion that the county “received” $100,000.00 purchase price by withholding county tax money? If you withheld it how did you receive it?

Can anyone explain how Mr. Isaf’s statement can hold any water when compared to the auditor note, which points out the Ambulance service, almost 2 years after the original purchase, enters into a new agreement that requires the paying back of $100,000.00 by making payments at $800. per month and even states, “in consideration of $100,000.00…”?

I thought Mark said Dee didn’t have to pay anything since the county held onto the money?

What you have here is a perfect example of people refusing to sit down, look at the records on the table, and listen to the facts.   We will again, in greater detail than ever before lay out this case to prove that not only was Mark Isaf’s opinion wrong and completely void of facts, but so are the notes from the Auditor as what we have in our hands clearly proves them both wrong, ignorant, or just plain deceptive.

As far as the auditor note, considering they are refusing to divulge who gave them the information that lead to the placement of that note in the Audit, it’s a pretty safe bet that someone wanted that statement in there as a means to end our push for Dee Burgin and his wife to pay for what they received from the county.

Mr. Isaf’s written opinion was based on his claim he interviewed every party involved, however when questioned on that claim during a County Board meeting he admitted he had not spoken with Lisa Burgin, a signer on the contract.  He also has refused to speak with the very people who are making the allegation and have all the documents in hand.  I find it difficult to draw an opinion on an allegation without ever speaking to the person making the allegation in the first place, don’t you?

One of the first holes we are going to punch in Mr. Isaf’s opinion is in relation to a statement he made in his report.   As a claim to support that Burgin was not required to pay the $100,000.00, Mr. Isaf states: “This would explain the lack of a cancelled check or other evidence of payments in the amount of $100,000.00 from Burgin to Edgar County. “

So can someone explain how with the lack of a cancelled check or other evidence of payments in the amount of $100,000.00 that the Licensed CPA firm came up with a statement of fact that payments were made to pay back the $100,000.00 since 2005 and the amount now owed is $0.00?

If there were no cancelled check or other evidence of payments in the amount of $100,000.00 and the auditor claims payments were in fact made, and the debt, that Mark claimed was never owed, is paid, Ruh-Roh is the best I can come up with.

More details to follow as it appears the deceit started well before the actual sale of the ambulance service and continues to this day!

Words from Sir Walter Scott:
“Oh! what a tangled web we weave
When first we practice to deceive.” 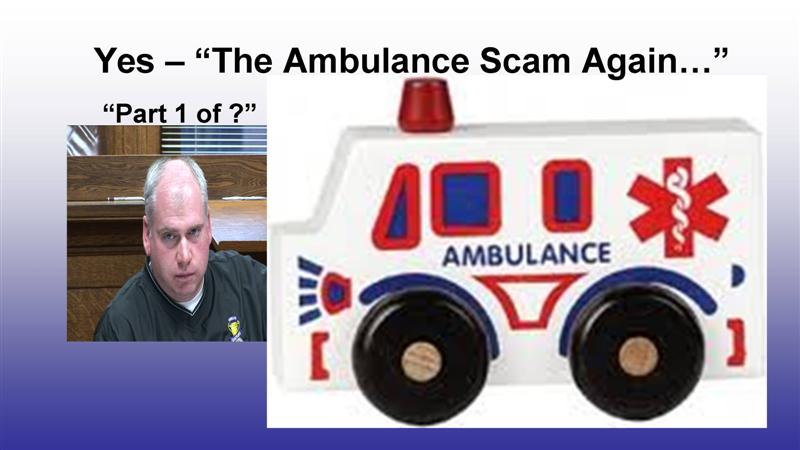