In a letter dated January 28, 2013, received through a FOIA request from IDOT, it seems that more and more people with college degrees cannot read and comprehend certain documents, rules, and statutes – or they intentionally try to  avoid talking about all of the statutes pertaining to certain subjects.

Interesting how Mr. Smith failed to mention one word about the State Statute that also applies to those projects!  Even more interesting is the wording regarding involvement in “contractual” activities.  No mention of activities that don’t involve a contract, which seems to be common place in the City of Paris, which Craig Smith is the Mayor!

Will not participate?  So says who?  He has already violated his recusal letter and got caught.  No more bites at the apple!

This is not about an issue of “pursuit” of a federal contracts Mr. Smith.  It’s about the state statute of Prohibited Acts by elected officials.  A fact you clearly avoid in your letter to IDOT.

The fact that Mr. Patrick may not pursue a contract or subcontract doesn’t mean some other contractor won’t, who in turn gets material from Mr. Patrick.  Do we really have to spell that out?

Mr. Patrick has ALREADY violated the state statute and sold materials to the county and billed the county and called a vote to approve payment to his company… May Arise?

Craig Smith is concerned about terminology?  Really?  It’s called the Public Officer Prohibited Activities Act, Mr. Smith. The key point relates to this one phrase.  “which such officer may be called upon to act”.

If Mr. Patrick MAY be called to ACT on an intergovernmental agreement with those bodies, which the county currently has, and could potentially enter into more of, he would be in violation of the state statute! See this previous article. This is why Mr. Patrick cannot provide material to, or bid on, local school district projects (the new high school), township projects, local municipality projects, and others – and the same still stands – because there are intergovernmental agreements, or the potential for them, between the county and other local governments and districts. This also prohibits him from competing on contracts and from selling materials/supplies for other contractors that do compete on these projects.

Futhermore, IDOT is only concerned with highway (and airport) improvement contracts – a different state agency is concerned with the school project, and I predict he will soon be receiving a letter, in the very near future,  referencing a potential conflict of interest in the new high school project. The potential conflict in question pertains to ALL public projects for ALL public bodies in the county. Number 6 should not even be on the list, of course he can still sell materials and supplies for private individual projects in the county – nobody said he couldn’t.

And you are asking in what capacity Mr. Smith?  Are you asking on behalf of the County Board Chairman?  If so you are not allowed to represent county officers in county matters.

Again, it’s clear Mr. Smith very carefully avoids any discussion of the fact Mr. Patrick can’t be trusted to do as he outlines, as he has already violated his own recusal letter and already violated the state statute by providing materials to the county, billing the county, and calling for a vote for the payment of those bills.

His new recusal letter has no more value than the last as the trust has been violated. The solutions offered by Mr. McGuire only referenced a Federal Statute.  It’s no mistake that Mr. Smith has avoided ANY mention of the state law, which Chris Patrick has violated!

In another paragraph of double speak, and not a single reference to the state statute which has already been violated, he requests the District (IDOT) reverse its decision to not approve contracts signed by Mr. Patrick. Why is Mr. Smith requesting reversal of a decision on behalf of the county? Shouldn’t that be the State’s Attorney’s job?  Is it possible that the States Attorney didn’t request this because he already knows the law has been broken and IDOT is correct?

Mr. Smith just can’t get over the fact the recusal letter has no meaning since Chris Patrick has proven he can’t be trusted to honor it.  Even if he could, it does not get him out of the state statute, which again, Mr. Smith carefully avoids!

Is the state obligated to respond to Mr. Smith on a matter that clearly should be handled with the State’s Attorney?  If there is no response what does that mean?
[gview file=https://edgarcountywatchdogs.com/wp-content/uploads/2013/02/IDOTfoiaSmithLetter.pdf] 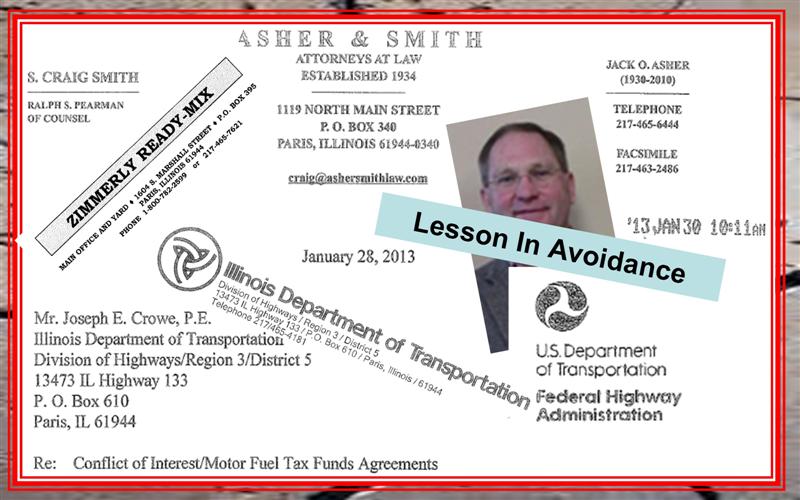