This is the Audio from the County Board Study Session on February 11th held at the County Highway office.   Audio

What your going to learn is that Chris Patrick has a CLEAR problem with accountability, honesty, openness, and I think when your done listening and tying all this together one common denominator will expose itself, which is Character, as in lack of!

Mr. Patrick continually refuses to answer questions from the public yet has no problem wanting answers when he is asking the question.

During the County Board meeting in November, where Breastfeeding was a key topic, Mr. Patrick was in the room as a newly elected board member who would be taking his oath of office at the next meeting.  I spoke at that meeting and was discussing several matters relating to accountability and compliance with the law when I made this statement.

“There is ongoing investigations, Mr. Patrick  your actually part of an IDOT investigation, I don’t know if your aware of that or not, for free driveways, you’re going to be a new county board member, you sit out at the airport, were you aware of this breast feeding thing”-

Don’t take my word for it!  Watch and listen for yourself.  The portion in question is at the 12:55 mark.   Please note that the focus of my comments had little to do with Chris Patrick and was more about the overall lack of leadership in this county.   County Board Video

With those facts now laid out, the audio from the last meeting at the highway department you can hear Chris Patrick CLEARLY make a statement that is in fact a TOTAL LIE!

When Chris “Character” Patrick asked me about the outcome of the IDOT investigation into the driveway matter, he made the implication, falsely, that I commented that it was illegal, him getting a free driveway.

Sadly, you have to dissect the word games Mr. Patrick likes to play, as he has learned from Bob Colvin and clearly Craig Smith as they all play the same game.

Why not?  Because the Truth has NO AGENDA!

I very clearly informed Mr. Character’s claim regarding my comment during the board meeting in question was in fact wrong, as I had proven at the most recent meeting, of which the famous words of County Board Chairman’s always respond with when proven wrong, were echoed by Mr. Character himself, NO COMMENT!

Mr. Character also refuted my statement that IDOT has not completed the investigation on the driveways.  And I even said, if they had, I was not aware of it.

And the magic response from the man of the hour?

“Well they have!”, as in, they have finished the investigation.

As you can hear in the audio, he claims IDOT has completed the investigation yet he refuses to report the outcome of that investigation.  Does anyone else find that strange?  Make an issue and imply you have done nothing wrong and then refuse to disclose the report?

So that same day, I asked this question to the investigator I have been working with.

I was confronted by Chris Patrick today with a claim he spoke with IDOT today and that he has done nothing wrong as it relates to the driveway matter.

If I recall, our request for investigation dealt more with the road commissioner and his actions than the ones getting the driveways.

As I understand it, the road commissioner TRADED materials for the driveway for fuel from Chris Patrick.

Not sure what the real story is but anyway, it was claimed today in the county board meeting that the investigation is over.

If that is the case, is it possible to get a copy of the report?

The response from IDOT?

Still Confidential and will be until they finish their work!  When that happens they will talk formally!

So Mr. Character, if what you said was true the date on the final report that you want me to report on should reflect support for your claim, which is that the investigation is over.

I am hear to tell you It Will Not!  It won’t, because the work is not done by IDOT and when it is, I will publish the report and the dates will in fact prove that your statement is in fact not true.

Several issues expose themselves that again point to Character, or lack of!  Mr. Patrick apparently “hears” things that are not said, interprets them to have a meaning that only he understands, and then lies about the events for reasons only he understands.

What Mr. Character fails to realize is the very key point I was trying to make during the November meeting.  This county lacks leadership.  Leadership is a Character issue.  Mr. Patrick, I suspect, is going to hang his hat on the word FREE, as a justification he did nothing wrong as it relates to his private driveway.

As pointed out in my question to IDOT, the original complaint about driveways was directed to the public official in charge of allowing that to happen, more so than who received them.  Yes, those who received them appear to have the right political connections, but our issue is about abuse of our tax dollars by public officials.

We didn’t even know about Chris Patrick getting a driveway until after our original complaint as that fact came out during the IDOT investigation.  All we knew was those that we knew about hadn’t paid for them, thus they were free.  After that article ran and things got exposed, payments got made!

The facts regarding Mr. Character and his driveway was that the road commissioner, utilizing county manpower and equipment, did in fact do work on Mr. Character’s driveway.  What we don’t know is what was the deal, if any?  We have now heard “rumors” that Mr. Patrick “bartered” for the work, as in an exchanged fuel for the work done by the county.

Regardless what the deal was, the leadership we need in this county is NOT the type that thinks it’s OK to have the county tax payer funded equipment do ANYTHING for his personal property, even if he paid for it!

The very act of utilizing public property for private matters is in fact a violation of the Illinois Constitution.  Public funds are for public projects and Mr. Character, your driveway is NOT a public project.  Nor is your Township allowed to “sell” or “barter” their services to private entities like yourself.

It does make more sense now why Mr. Character doesn’t think there is any Conflict of Interest with profiting from sales to the County.  He doesn’t care!  That is what he said about the airport not following the law while he was in charge for 20 plus years!  It is all making more and more sense the more we expose!

Character Matters, and the “character”, Chris Patrick, without any doubt, lacks Character! 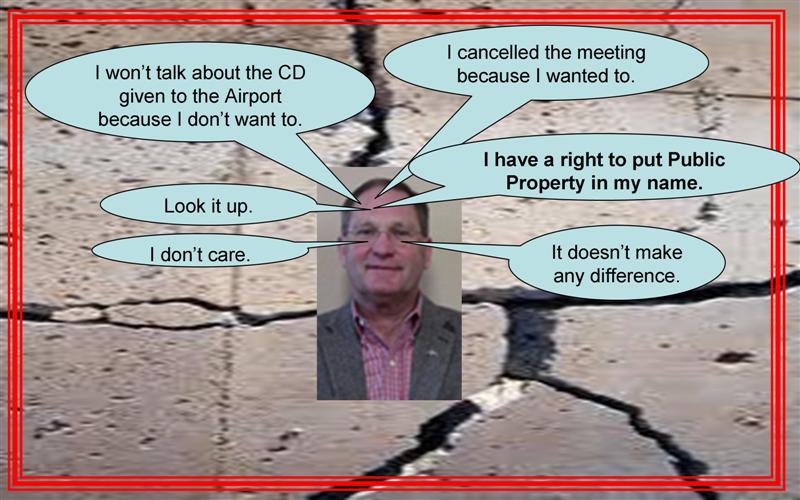