Election laws exist to preserve the integrity of our government. (Glenn v. Radden (1984)

The first petition objection filed was Sandra Neal’s objection to Rich Wilken’s petition based on his not circling “Unincorporated Area” instead of “City” on his Statement of Candidacy. This caused the County Clerk, by law, to call for a meeting of the Edgar County Electoral Board.

These six objections were also heard during Electoral Board Proceedings.

Sitting before three elected officials who took an oath to uphold the law were 4 sets of candidate papers and petitions objected to by Kirk Allen and John Kraft.  Objected to because they were not fastened.  Eye witness testimony as well as the fact they sat in front of this electoral board unfastened you would think is all that is needed…Not in Edgar County.

Also before that board was two sets of petitions objected to based on a pattern of fraud, to include signatures that were not genuine!   Prior to the actual hearing on those, the candidates withdrew from the race.  It appeared to be clear that they did not want to put Joe Keys on the stand.  Good call, as the evidence is overwhelming.  Isn’t it interesting Joe Keys is involved in water district candidate petitions?  Interesting because his Brother-in-Law is none other than Bob Colvin, the very guy that makes his living off of the water district and must ensure his cronies stay in office.

The very foundation of our Country is based on the rule of law, and no matter how trivial you may think some of those laws are, they are the very laws we are bound to until we change them.  We cannot pick and choose what part of the law we want to adhere to or ignore.  Each and every time we widdle away at those laws we slowly slide into a world of lawlessness.

The Board and a Failure To Appear

Such is the case with the Edgar County Officers Electoral Board.  What type of hearing do you think you’re going to have when the Chairman states the law, that deliberations are required to be in public, and then informs everyone they are not going to do it that way.  That is a violation of the law that widdles away at our society.

Or when Joe Keys fails to appear even though he was subpoenaed.  The electoral board did nothing in that situation and the State’s Attorney, one of the officers on that board, told the objectors, “You’re on your own!”

Wrong Mr. Isaf.  We are not on our own. We are on the side of the law, of which you appearently either don’t know or refuse to learn.   You sir did not follow the law nor its requirements.  The Election Code is VERY CLEAR on what your duties were, and you, along with the other board members, failed to do your job.

“In case any person so served shall knowingly neglect or refuse to obey any such subpoena, or to testify, the electoral board shall at once file a petition in the circuit court of the county in which such hearing is to be heard, or has been attempted to be heard, setting forth the facts, of such knowing refusal or neglect, and accompanying the petition with a copy of the citation and the answer, if one has been filed, together with a copy of the subpoena and the return of service thereon, and shall apply for an order of court requiring such person to attend and testify, and forthwith produce books and papers, before the electoral board.”  (Directly from the third paragraph of the Election Code statute!.)

If we don’t agree with the law we should change them through the legislative process.  Although slow and agonizing, it’s the way it’s done.  All too often I see a disregard for parts of the law because of opinions that it’s silly, or it makes no sense, or we find ourselves asking, what’s it going to hurt if we don’t follow it as its stated.  I hear explanations of what the statutes say, followed with a statement that we aren’t going to do it that way because other counties aren’t following the law either, as if that somehow justifies the disregard for the law.

What it’s going to hurt when we justify not following the law is our society!  When our personal opinions override clear statutory direction the integrity of our system becomes cracked.  The longer we go without fixing those cracks the worse things become.

Election Laws Preserve the Integrity of our Government and the Edgar County Officers Electoral Board did nothing but further its decay by their total disregard for the law.

In fact, they not only violated numerous election code statutes, but they also refused, in two different meetings, to allow the public their right to speak.  The hell with the First Amendment and the hell with the Open Meetings Act which they are bound to.  The board was politely asked, at both meetings to allow public comments and they refused. Those refusals have now been met with a lawsuit, Case Number: 2013-MR-8.  I suspect the county will lose that one hands down.

The watchdogs identified cracks in the water district to include the fact they didn’t even know they were a public body and have never even reported their finances to the state in over 20 years.  The watchdogs filed petitions to ask the voters if these people should be elected or appointed.  86% chose to be elected.  A clear indication that the people being served by this district are ready for a new direction.  That new direction established a total of 10 candidates for office!  TEN!

Of ALL the petitions we reviewed, and we reviewed them all, we found 6 that had major issues worthy of objections based on clear statute violations backed with case law.  We didn’t PICK the candidate then create the issue.  The fatal errors were done by the candidates themselves or the circulators they selected.

Our research gave us hope in the fact that our very election laws are written with specific meaning and specific purpose as to ensure the integrity of our government.

The evidence presented and the testimony supporting the evidence was so rock solid, the candidate’s attorney didn’t call a single one of them to the stand to refute the testimony or the very petitions in front of the electoral board.

The people believed, based on the evidence presented and the testimony heard, the public body would make the right decision and rule based on law.

Proved yet again that many of the elected officials in Edgar County have no reading comprehension beyond the 5th grade, assuming they even read the statute.

In their ruling it came down to a claim that the objectors must present evidence to prove the petitions, BEFORE BEING PRESENTED, or at a minimum, at the time they were presented, failed to meet the statutory requirement.

Not only does this fly in the face of all logic, it clearly is not supported by any case law or statute.  It would be impossible for any objector to prove petitions met the statutory requirement before filing.  The candidate is not under any obligation to turn over petitions for inspection and even if they did, the statute makes it clear they have to first be turned in before a claim of an error exists.

As if that is not enough, they insisted that at a minimum the objectors would have to prove they failed to meet the statutory requirements AT THE TIME THEY WERE PRESENTED.

That too is impossible without camping out at the location they were turned in, and ensuring you were there the very second they handed them to the clerk.  If their position were to have any validity to it or support from case law, there would be no need for a clerk to comply with the statute and ensure the petitions’ security.

The bottom line, well in advance, contrary to board members claims, at least two of these members discussed critical elements of the case with a clear bias which provided the impression they already had their mind made up before they even heard the case.

Even the State’s Attorney, sitting as an electoral officer, denied there were any hostilities between Mr. Allen or Mr. Kraft  when they asked him to recuse himself because of the expressed hostilities.  He DENIED any hostility, but clearly he forgot about this comment in his email to Mr. Allen just three months prior.

Other Violations Of Law?

Any others laws that might be of concern to this public body?  Yes! They violated the objectors and one witnesses  Federally protected Constitutional Rights, which are also directly protected through the election code which they are bound to during the hearing!

(10 ILCS 5/29-17) (from Ch. 46, par. 29-17)
Sec. 29-17. Deprivation of Constitutional Rights – Liability). Any person who subjects, or causes to be subjected, a citizen of the State of Illinois or other person within the jurisdiction thereof to the deprivation of any rights, privileges, or immunities secured by the Constitution or laws of the United States or of the State of Illinois, relating to registration to vote, the conduct of elections, voting, or the nomination or election of candidates for public or political party office, shall be liable to the party injured or any person affected, in any action or proceeding for redress. (Source: P.A. 79-1363.)

A First Ammendment Constitutional violation occured when the board refused our right to speak at the meetings. 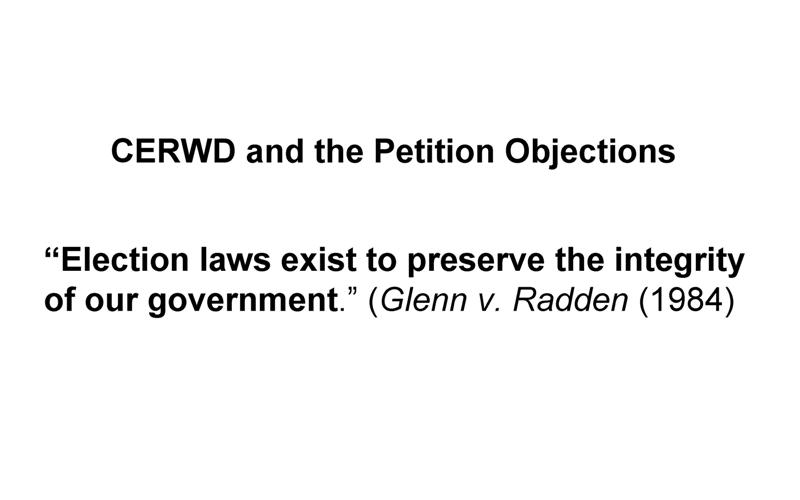