My God, Where Does It Stop?

Conflicts of Interest – Self Serving – Violation of Rights – Lies and Total Disregard for the Law!

WHERE DOES IT STOP?

It Won’t until We The People stand up and demand our laws be enforced and we elect people with honor and character!

Strap on the seat belt and prepare as this one is going to validate the very problem we have in this county and it starts with the actions, or lack of action by the very people who are suppose to enforce the laws on the books.  Laws that are designed to ensure conflicts are avoided!  When ignored, we get what we have!

A document we now have in our possession obtained from the Illinois State Police who received it from the City of Paris should be enough to infuriate each and every person in this county, although I think we have offered enough justification for that in the past.

Total County Funds expended in seized vehicle at this point?

So what happen to that vehicle?

In roughly 65 days a vehicle is seized during a drug bust, repaired at the county expense totaling $264.01 and then sold for $205.00 to a County Employee.

The lucky recipient that used your tax dollars to seize and then repair the vehicle, and then turn around and purchased it in direct violation of state statutes?

Is that a problem?

(55 ILCS 5/3-6026) (from Ch. 34, par. 3-6026)
Sec. 3-6026. No purchase of property at own sale. No sheriff or deputy sheriff shall become the purchaser, nor procure any other person to become the purchaser for him or her, of any property, real or personal, by him or her exposed to sale, by virtue of any judgment or process; and all such purchases made by any sheriff or deputy sheriff, or by any other person in his or her behalf, shall be absolutely null and void.
(Source: P.A. 86-962.)

With the clear conflict of interest with Chris Patrick and his disregard for the law is it any wonder we are where we are at in our government system when no one is held accountable to violating the law?

The sale of this vehicle, which took place before the guy was even sentenced, was to a deputy in the sheriff’s office that was part of the arrest and seizing of the vehicle.  About the only thing we have not confirmed is that the he purchased the vehicle to give to his daughter to drive.  Can you say, Conflict of Interest?

I would say the Letter from Judge Garst spells out quite clear that there is a problem.  The bigger question I have is why was a law enforcement officer allowed to get away with it, even after it was exposed?

We get what we have in our society when we continue to pick and choose what laws we pay attention to and which ones we ignore.  Or when we select people for office or employment with virtually no experience in how to vet a candidate, or knowledge of key human resources as it applies to selecting employees.

Right now the pattern, dating clear back to at least 2002, is one of total disregard for the law by many of our elected officials.  From Tim Crippes selling illegal guns to Jim Keller taking out illegal loans.  These people have all gotten away with violating the law.

Now we have the infamous businessman Chris Patrick.  The guy that got selected as Chairman with no consideration as to the baggage he brings to the table or even a question of concern that there just might be a conflict of interest. In fact, not a single question raised so we have what we have.

Many may recall that we urged numerous times these things get fixed and all we got was lip service and “no comment” as a response.  John and I assured the board that if they are not going to ensure the laws are followed then they leave us no option than to file a criminal complaint.

With the current situation with Chris Patrick, and the clearly spelled out Conflict of Interest, he has to be held accountable.  It appears the only thing that is going to do that is the filing of a criminal complaint, short of the State’s Attorney taking action on his own.

The county and all its government bodies are on the ledge and about to be pushed off as it relates to all state and federal funding.  Are We The People going allow Chris Patrick to singlehandedly destroy the lives of at least 20 people and their families?  Are we going to allow this man to prevent numerous projects from going forward because of “his opinion” that he is doing nothing wrong?  Projects that employ far more than just those working at the highway department!

No matter what you all think of me or any of my efforts over the past several years, please know what I have done is because deep down I knew it needed to be done.  I can’t explain and won’t try.  I just know that regardless of any topic I have covered, ALL have agreed this one MUST be rectified, sooner than later!

I pray that it’s not going to take criminal charges but know myself and many others are fully prepared to take that step if this is not resolved. 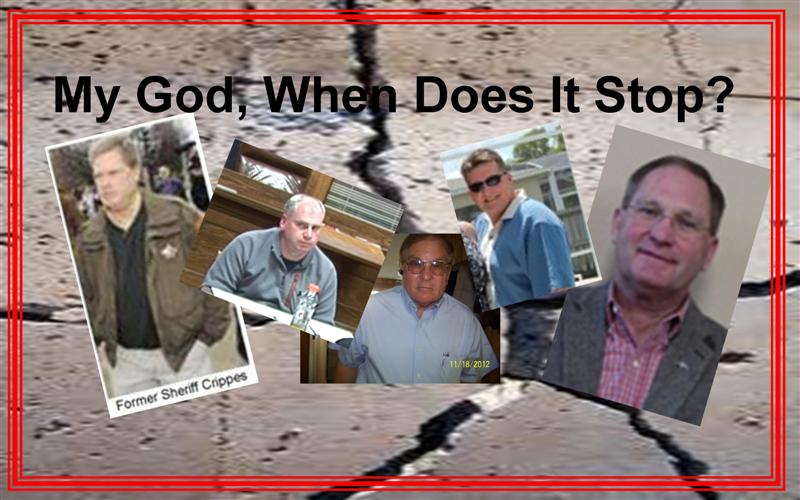