EDGAR CO. (ECWd) – It appears that business as usual continues with the Clark-Edgar Rural Water District.  Current debt obligations, as reported in this year’s audit, which includes obligations of bond payments, interest payments, and a line of credit, comes to a whopping $23,568,371.00 dollars.

Now in fairness, as claimed by the Chairman, Tom Jones, they don’t count interest so it’s not really that much debt.  If you don’t count the interest they are sitting at $16,397,311.00 dollars according to the math in the 2012 audit.

What I find interesting with that position is that last year alone they paid $451,279 dollars in interest payments.

You know, the interest they don’t count!

DON’T TAKE MY WORD FOR IT!  READ FOR YOURSELF!

Note #20 – In November of 2011, a payment of $22,850 was received from FEMA to reimburse the District of additional costs incurred during ice storms in January and February of 2011. The payment was not accrued in the April 30, 2011, financial statements due to the delay and the uncertainty of the payment.

Now, I admit I am not a CPA, but I do know that when the SAME EXACT NOTE NUMBER, which has the SAME EXACT STATEMENT appears two years in a row in an audit, there is a problem.

Even more disturbing is the information provided to the Illinois Comptroller’s office, who by the way is now being sued by For the Good of Illinois for non compliance with the Freedom of Information Act.

According to the financial report filed by the CPA who has claimed the water district is a Quasi-government entity, which it is not, fails to disclose a single thing about the line of credit loan on the Statement of Indebtedness page.  The only thing they listed were the Revenue Bonds.

And let’s not forget this very same public body is planning on going another $5,000,000.00 in debt very soon with yet another bond!

Did you know they hold more accumulated debt than all of the debt held by Clark County and Edgar County government bodies combined?

Like I said, don’t take my word on the figures!  Download the files, go to the state web links and cross reference for yourself.  I am human and may have missed something but after cross checking three times I am pretty confident in what I am reporting! 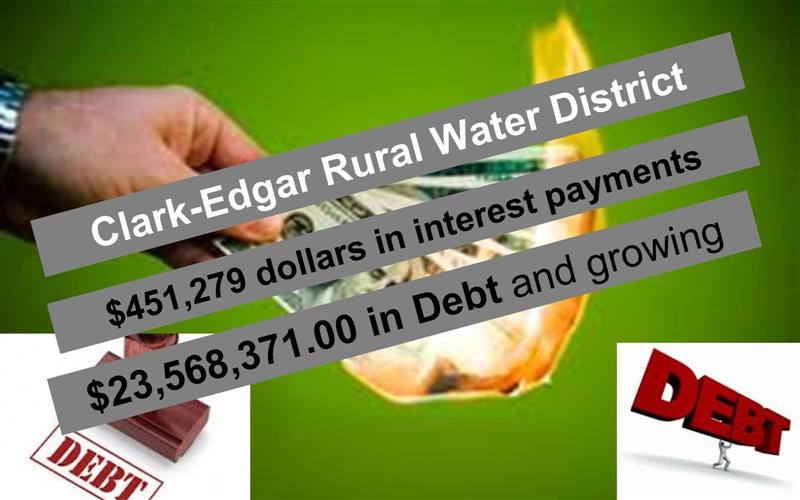