Kirk asked about the reference to grants in their annual audit. The reason for the question was because, according to the State of Illinois, the Water district has NEVER received a grant.  Mr. Jones confirmed that they did not receive any grant and that the revenue for Grants in the Audit is in fact the grant revenue that Townships receive.  According to township statutes, all revenue that a township receives is required to show up in there books, not the books of the Water District.

The intergovernmental agreements do not outline that the money is to be turned over to the Water District, so not sure how they can “legally” claim Grant Revenue when they have never received a grant. Having that revenue reported on their books does make it “look” better financially.

The other concern found with the finances was the discrepancy with the Illinois Comptroller filing.  There were three different reported expenditure numbers last fiscal year – two in the audit and one on the report to the Comptroller. Keep in mind, this is the very first filing, in the history of the District (est. 1989 – 23 years ago), to the Comptroller of the State of Illinois – this is an ANNUAL requirement!

On page 2 of the CERWD Registration File,  at the bottom under Appropriations – Below that set of boxes it tells them to provide annual expenses if they don’t tax.  CERWD does not tax, so that number is their annual expenses.  The CFO for the water district claimed $1,170,341.00 for annual expenses.

The trustees discussed their intent to sell another $5 million in bonds, but the audit for this year is not complete yet, so they have to wait until it is finished before talking to the bank. This Bond discussion starts at the 8 minute mark in the video.

Extending the Line of Credit – No Money to make Payment!

At the 9:12 mark in the video, Mr. Jones talks about extending the line of credit out until February 2013 because they do not have the money to make the payment (without the sale of the bond).

Video provided by the District thru a FOIA request: 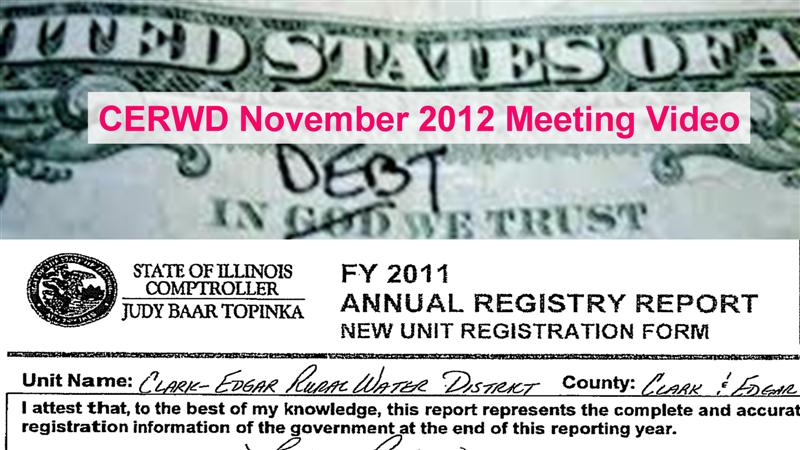