When you can see it coming and they ignore the truth and the facts, we can only conclude there has to be an agenda driving such stupidity in some of our elected officials.

In last months county board meeting I addressed the board and PLEADED with them for someone to step up and hold people accountable and take a leadership role.

I also directly engaged Chris Patrick, who was at that meeting and is a newly elected county board member yet to be sworn in.  Why engage a future county board member?  The fact that he was present provided the opportunity to shed light on his actions as a private citizen, who just happens to be an un-indicted co-conspirator in the free driveway scandals in this county being investigated by the State.

Yes, the newly elected county board member received oil & chip on his personal driveway.   Couple that with all the clearly questionable actions taking place at the airport, it’s clear Chris Patrick was the LAST person that should be our County Chairman as that is neither the character nor leadership this county needs.

The goal was to hopefully circumvent the efforts of Karl Farnham who was doing all he could behind the scenes to control who was going to be the next County Chairman, which by the way is about as unethical as can be.  The discussion of public business is suppose to be done in public for all to see, not behind the eye of the public and in secret.

I began addressing the board at the 11:52 mark in the video.

You would think that the exposure of clearly questionable actions would be enough to raise enough concern to ensure Chris Patrick not be selected as County Chairman.

Well, the influence of Karl Farnham overrode all common sense again.  I was informed well in advance that Mike Helsley was going to make the nomination as Karl had shared that info with certain people and they share with us.

As you can see in the video, Mike does in fact make the nomination at about the :30 second mark, and if you look close you will see him turn slightly during that nomination and look at Karl.  The video doesn’t show his eyes but from where I was sitting, it was clear he looked right at Karl while making the nomination.  Remember, it was Karl, who orchestrated the nomination.

What we don’t know yet is what Karl’s agenda is to control who is in the Chairman position but we suspect it’s more about ensuring someone else is not the Chairman.   We are confident the truth will eventually expose itself as it always does!

More evidence that Chris Patrick has no business as the County Chairman is found in his response to my question pertaining to the improper use of public property by Jimmy Wells at the Airport.  My presentation to the new board started around the :40 minute mark.

Chris Patrick, as the Chairman of the Airport board, knew that his airport manager is storing his private airplane in the main hanger and not paying rent for such storage.  As the Airport Manager, it’s hardly appropriate to use county property as his own personal storage facility, however our new County Chairman presents what appears to be justification for this questionable behavior of the Airport Manager.

His justification is that the county stores stuff in the hanger that Mr. Wells does rent.  Two key points Mr. Patrick:

1. You didn’t mention that his rent is reduced on that hanger space that has county stored property compared to the rent of others.

2. The county wouldn’t need to forfeit rent for storage if Mr. Wells would remove his airplane in the main hanger that he pays no rent for!  Remove the plane and you have space for what ever county property is being stored in the other hanger!

So in essence, the great leadership of Chris Patrick as the Airport Board Chairman has already cost the county money with a lame excuse of storage of county property.  More proof that this man has no business as a County Board Chairman, nor any other elected position.

With just this little bit exposed coupled with the fact this meeting was held in violation of the county code these new board members get a chance to pull their head out of their rear ends and do what’s right at their next meeting, which should be the meeting they re-do all action taken at this one.

I pray that they select the Chairman based on integrity and qualifications and not the misguided direction of Karl Farnham who is a County Board member who has a clear history of disregarding the law in his capacity as an elected official.

This new board can now digest the choice they made at this meeting and hopefully realize that decision was one based on personal agendas pushed by Karl Farnham, and that clearly, based on exposed lack of integrity and clear good ole boy management by Chris Patrick at the airport, it’s more than enough reason to not nominate him as a County Board Chairman.

UPDATE:  Watch the video recorded by the County Board below:

UPDATE 2 : THIS VIDEO WAS EDITED TO REMOVE A FEW PEOPLE AND THEIR STATEMENTS.

We do not know who edited it or why – it wasn’t us 🙂 We will try to find out. In the meantime, we have submitted a FOIA request for their copy of the COMPLETE video, and we will upload it as soon as possible.

OK – the camera records to a hard drive, when a file gets to a certain size it automatically starts a new file. The complete board meeting video ended up being 3 files – only 2 got uploaded – the county is uploading all of it soon… 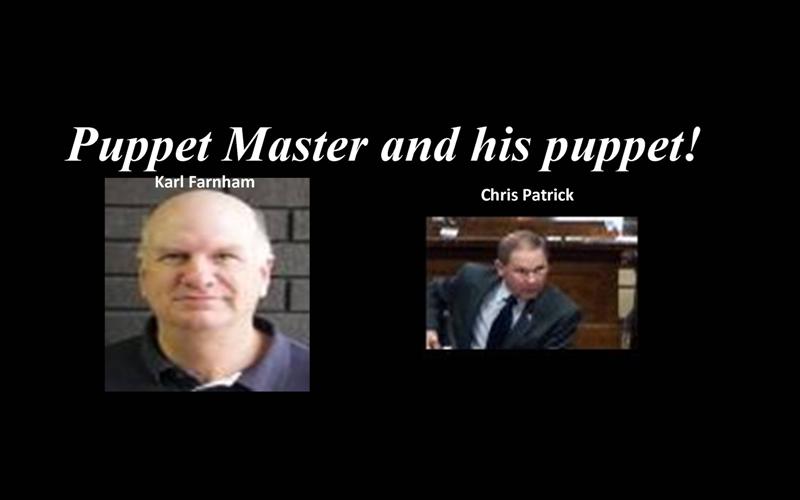