On June 25th, we ran an article on Jesse Jackson Jr., going on "medical leave" within hours of the For the Good of Illinois PAC's article referencing his "questionable" campaign fund raising tactics. We knew there was more to this story, and here it is:

The Blaze reports Jesse Jackson Jr. is faced with federal charges of misuse of campaign funds, along with allegedly trying to "cut a deal" with his federal accusers. The Huffington Post is reporting there might be a plea deal in the works that could include resignation, repayment, and jail time. 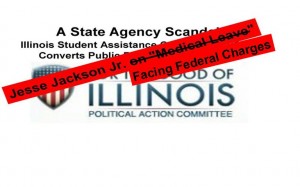