Freedom of Information. 5 ILCS 140. This is the very idea that keeps government bodies in check, and has been declared as public policy, by the Illinois General Assembly, that all persons are entitled to full and complete information regarding the affairs of government and the official acts and policies of those who represent them as public officials and public employees…and among other things to enable all persons to monitor government to ensure that it is being conducted in the public interest.

The General Assembly declares that providing records in compliance with the requirements of this Act is a primary duty of public bodies to the people of this State, and this Act should be construed to this end, fiscal obligations notwithstanding.

During the September meeting of the CERWD Board, the board hired an additional attorney to handle FOIA requests. At the same meeting, citing costs of complying with FOIA, they increased the price per page for a FOIA request (after the first 50 pages) to 15 cents, up from the 10 cents they were charging. I don’t think that will cover the cost of the attorney.

The Public Water District Act, governing this water district, does not allow for the hiring of more than one attorney – but they did it anyway, on the advice of the attorney they were hiring.

Sec. 6. The board of trustees may in its discretion from time to time by resolution passed by a majority vote provide for the appointment of an attorney, one or more engineers, and such other officers as said Board may determine necessary and expedient. The board shall in and by such resolution fix the term of office, compensation and prescribe the duties to be performed by such officers.

Go ahead, read that paragraph to any 4th grader, then ask him how may attorneys can be appointed. I’d bet they give you the correct answer.

First Month as FOIA Attorney? Subject Your Client to a Lawsuit!

What was his first order of business? Violate the Illinois Freedom Of Information Act or course! The below two items contain what may be the first act of the CERWD’s new FOIA attorney – or at least shows they failed to get his input.

Mr. Allen requested a document from the CERWD. The document had to be obtained from their contracted engineer firm, who promptly sent an invoice for $76.00. The CERWD then advised Mr. Allen that he had to pay the $76.00 in order to obtain the documents he requested. This is a violation of the FOIA Act, you would think an attorney, hired to handle FOIA requests, would advise them to read the Act to ensure they follow the law. Mr. Allen filed a complaint with the Illinois Attorney General stating the fact that they were charging him $76.00 for documents that are required to be supplied at no charge to the requestor. The AG has assigned the number 2012 PAC 21534 and is currently investigating the facts as alleged by Mr. Allen.

I submitted a FOIA request to CERWD seeking, among other things, a copy of Mr. Allen’s FOIA request and all responsive documents to that request. I was sent a copy of the invoice to Mr. Allen instead of the documents responsive to his request. This is considered a denial. I subsequently filed a Complaint For Declaratory Judgment and Injunctive Relief with the Fifth Judicial Circuit in Edgar County (Case Number: 12 MR 44). Defendants are named as the CERWD and Mr. Conover, in his official capacity as CERWD FOIA Officer. He seeks the documents pursuant to his FOIA request, court costs and attorney fees (should he hire one), and other further relief as outlined in 5 ILCS 140/11(j), which states:

If the court determines that a public body willfully and intentionally failed to comply with this Act, or otherwise acted in bad faith, the court shall also impose upon the public body a civil penalty of not less than $2,500 nor more than $5,000 for each occurrence...

Citizens should not have to go to these lengths to acquire public documents. This public body has insisted on frivolously spending public money on an attorney (whose sole purpose is to pass public documents to the public), on trying to keep public documents from the public, and now they have to defend their actions to the Attorney General, and to the Fifth Circuit Court.

We believe this was a willful and intentional attempt at limiting the information given to the public by making it cost the requestor to obtain information. It will not work. 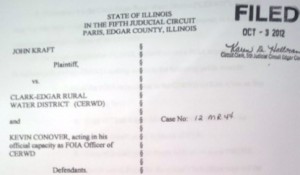