From ignoring felony crimes to covering them up, it’s very clear  the history of the Edgar County Sheriff’s office is one of self-serving motivations from personal enrichment to blatant power trips and even criminal acts.

Karl Farnham has pointed out his actions are past the statute of limitations, or so he thinks.  For the sake of bringing “this” series to a close we will give him that position for now, but please note we have not heard a denial to his wrong doing!

The Trio of Crippes, St. Clair, and Hopper all failed to do their job and uphold their oath of office.  Yes, they are all out of their positions in Edgar County but there is no guarantee that will last.  Short of a felony conviction any one of them may well be right back in a position of power if the people of this county don’t learn from what has taken place and demand action against them.

It’s our understanding that St. Clair is taking a Chief of Police job in Newman, Illinois.  I wonder what that city council really knows about his actions in Edgar County?

Hopper is currently in litigation with the county in hopes of getting his job back.  Can you imagine?  This is one of the guys who informed the now convicted jailers they could simply resign with their DIGNITY and it would all basically go away.   Wake up People!

Ball and Rhoads we never have to worry about when it comes to a position of power and/or law enforcement, as they are now felons.

Burgin on the other hand appears to know no shame.  With a laundry list of wrong doings and a confirmed Civil Rights Violation on the books, many would think he is gone as well but no, he is not.  The County Board has REF– USED to remove him from the 911 Board and don’t ask us why as we couldn’t get a word out of them on this matter.    We know that Burgin is appealing the Civil Rights case and although very difficult to overturn a jury verdict there is a slim chance that could happen.  He too is in litigation with the county for what he claims is wrongful termination.

Burgin is an interesting addition to this story, as it paints the pattern of practice well established by his mentors; Farnham, Crippes, and Hopper.  I have not forgotten the phone call from Burgin in which he threatened me with a law suit for our exposure of the truth.  From padding his pay check to illegal expenditures of 911 money, all validated and factual!

He could not intimidate me into silence.  What he did do though, is provide valuable insight into what we are dealing with in this county.  You see, his comment, after over an hour of trying to intimidate me, was a shift of him realizing we are neither stupid nor afraid.  He acknowledged he had first hand knowledge of criminal acts of powerful figures in this town and if he could be protected he could bring them all down.

That acknowledgement fits the pattern perfectly of how these people operate.  They KNOW when things are wrong but they use them as a chip in the game instead of upholding their oath of office to enforce the law!  That chip in the game is what is leading to their serfdom cracking. But until its crumbled and washed down the drain, our work is not done.

Mr. Burgin has no business in any public capacity as he can’t be trusted.  He has lied to me, deceived the county with a bogus invoice that he was forced to pay back, and even lied to his own attorney in his attempts to intimidate us with his bogus law suit, yet his current actions point to a person who still thinks he has done nothing wrong.  He is at a point of wrong is right, as that is how its done in Edgar County.

How bad was it under the watch of Tim Crippes?  Try this shoe on for size and see how fast your feet begin to swell and stink!

“When the Employer has “reasonable” suspicions to believe that a deputy is then under the influence of alcohol or illegal drugs during the course of the work day, the Employer shall have the right to require the deputy to submit to alcohol or drug testing as set forth in this agreement.    There shall be no random or unit wide  testing of deputies, except random testing of an individual deputy as authorized in section 8 of the contract”

NO RANDOM OR UNIT WIDE TESTING OF DEPUTIES!

Can you believe YOUR county board and past Sheriff Tim Crippes actually approved this kind of contract for your LAW ENFORCEMENT personel?

From Section 8 of the Contract:  In the first instance that a deputy is found to be under the influence of alcohol, and all deputies who voluntarily seek assistance with drug and or alcohol related problems, SHALL NOT BE subject to ANY disciplinary or other adverse employment action by the county!

Yes people, that is in their contract!  First time is a FREEBIE!

Ok, in fairness, section 8 portion of the contract is based on a condition of the following:

a. The deputy agreeing to appropriate treatment as determined by the physician involved.

b. The deputy discontinue his use of illegal drugs or abuse of alcohol

c. The deputy complete the course of treatment prescribed, including an “after-care” group for a period of up to twelve months.

d. The deputy agrees to submit to random testing during hours of work during the period of “after-care”.

The foregoing shall not limit the county’s right to discipline deputies for misconduct provided such discipline shall not be increased or imposed DUE TO ALCOHOL OR DRUG — USE!

So in short, you can’t random drug test them, can’t discipline them when you do catch them doing it the first time, and even if you do catch them they get to go on the 4 step program and all is fine and dandy!

People, it’s this type of stuff that leads to the clear decay of our society and breakdown of our moral fiber, not to mention total loss of trust in our government.  This contract was put in motion by Monte Spillman, seconded by Verlin Funkhowser, and signed by Chairman of the Board, the infamous Jim Keller!  Monte Spillman is no longer on the board and with God’s Grace we will be rid of Funkhowser and Keller this November as they are not running again.  Sadly, people like Farnham are going to still be sitting on our county board and we must not forget his pattern of practice as sheriff was the mold cast for others to follow.

Will you help break the mold and cast a new one?

I pray that each and every one of you, who voted for people that allowed this to be in a contract for our law enforcement, thinks long and hard about your next voting experience and I beg of you to let it be a vote not based on what you “think” of the person, but what you now KNOW!

As if this is not enough, one only need to read the previous 4 parts of our Dignity series to grasp how bad things are with this culture of corruption.  We know many refuse to accept the truth for what it is, and that being the case, I challenge you to READ the entire ISP file that was the focus of most of this series and see for yourself how inept Tim Crippes, Roger Hopper, and Shane St. Clair were in the handling of felony crimes by two of their own.

My question still stands:  Why have they not been charged with misconduct for covering this up?  The two files make it clear what a real investigation is and how it should be conducted.  Interviews spanning 4 different state corrections facilities and months of work, unlike the TWO DAYS of Tim Crippes and his cronies trying to simply have them resign with their Dignity!

I do caution those willing to download and read these files.  In many places you may feel as if your reading a smut book.

Wake up people!  You may not be able to recover from voting a different Sheriff into office that has NO CLUE what law enforcement is!  Yes, it’s more than two years away, but it’s now that you need to learn the truth and apply it! 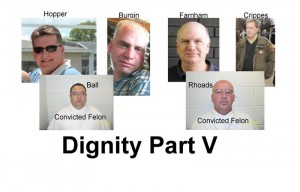