I took the time to read the "Local Mass Transit District Act", which deals with districts like we have in Edgar and surrounding counties.

No Trustee or employee of the Board shall acquire or have any interest direct or indirect in any contract or proposed contract for materials or services to be furnished or used in connection with operations of the District.

Since all Mass Transit District employees are employees of the board, the payments going to MIDSTATES SVCS would be in violation of the Act.

Kami Miller started the Chrisman, Illinois based "Midstates Services" in October of 2007 according to her assumed name publication notice in the local newspaper. It is unclear as to the nature of the business or what services it provided to the Mass Transit District. We have attempted to contact Kami for a statement but the only email address listed for Midstates Svcs bounced back undeliverable. If anyone has current contact information they could provide us it would be appreciated.

As an employee of the Board, any payment to Midstates Svcs would be in direct violation of the Act.

In one year alone (2011-2012), Kami "paid" her company around $14,000 for services provide to the Mass Transit District. These payments came from State and Federal Grants.

Why does this happen?

There are no excuses for these types of unchecked actions. The Local Mass Transit District Act took less than 20 minutes to read, and common sense should tell the average person you cannot start a company and pay yourself with Public Funds.

“Never let us be guilty of sacrificing any portion of truth on the altar of peace.” ~ J. C. Ryle 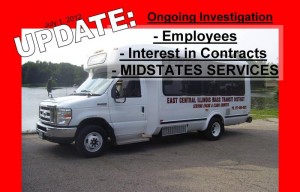