MARTINSVILLE, IL (DH) –
Residents of Martinsville can rest assured that only safe, pre-approved news appears on their library shelves. Head librarian Bethany Hubbard ([email protected]) has seen to it that only news sources with which she agrees 100 percent will be admitted to the Martinsville Public Library.
In a Facebook message sent late last evening to the new Disclosure Heartland newspaper, Ms. Hubbard informed them that she will not be ordering the  newspaper for the Martinsville Public Library because she disagreed with some assertions made by eyewitnesses interviewed for Angela Howser’s article on the Terry Payton trial in our most recent issue.
“Although there are reports from police and court reports; the story is mostly gossip from neighbors whom state they saw abuse for years yet did nothing to help this child. I assure you that you did not report the entire story. I am dissapointed. I would have loved to have added this paper to our local library but at this point and time I will not,” she said.
Sources used in the article included neighbors and relations who may be called to testify at the trial.
Although this was the only article with which Ms. Hubbard seemed to take issue, she decided this made the entire newspaper unacceptable for public library shelves. A librarian refusing to carry a newspaper over a personal disagreement with facts presented in one article may have chilling consequences for other news organizations who wish to report on controversial issues.
Disclosure Heartland has a strong commitment to the facts, as well as to sharing the many perspectives of community members involved in events of interest to the public. If a reader disagrees with statements made in the newspaper, they are free to present to them other evidence or write in to letters to the editor.
We feel that Ms. Hubbard has gone too far in banning this publication over what amounts to nothing more than a personal disagreement, and has abused her position at the Martinsville Public Library. As a public institution, after all, the library should provide local residents with a variety of news sources, whether or not one librarian disagrees with what is written therein.
We encourage our Clark County readers to politely petition Ms. Hubbard to allow this and future issues of Disclosure Heartland on library shelves. The Martinsville Public Library can be reached at (217) 382-4113.
http://disclosureheartland.com/2012/07/13/martinsville-public-library-bans-disclosure-heartland/ 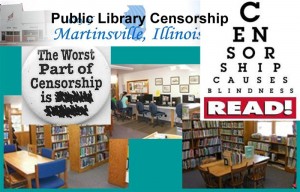