We received numerous requests to attend the Village of Brocton board meeting so we showed up with cameras ready.

My hats off to the Mayor for one very important part of the meeting, which was clear and transparent efforts to not only allow the public to speak but to actually have interaction with the members of the community. I think the County Board could learn a few things from such openness.

I have been to thousands of government meetings in my life and what I witnessed last night for a small town was absolutely the most inspiring meeting I think I have ever attended.

Sure there were cases of disorder and yelling as you will see in the video but lets look at what really took place.

The meeting was held in the Senior Center and it was “packed” with concerned citizens.  In fact, there were more people attending last nights meeting than I have ever seen attend any county meeting, and Brocton’s population is a mere 322 according the 2010 census.  I wonder if the fact they held it in the evening which is convenient for people made a difference?  Could be a teaching moment for the county board?

What raised such a level of concern to have that kind of turn out?  One ballot referendum!  A referendum of which was placed on the ballot by the County Clerk, who is in fact the person responsible for those ballot placements.  The issue was a YES or NO vote on establishing a Police Department in Brocton.  The majority of the votes reflected the will of the people was YES, however it appears since 4 members on the board are against it, the excuses raised for going against the will of the people was everything from “it only WON by 1 vote” to “the ballot was illegal”.

It should be noted that not a single board member had any evidence from the State Board of Elections to support their claims that the process was illegal, however that is the path they took using an opinion from their attorney.  Dont get me started on attorney opinions as we have proven those wrong with very little research.  Besides, an attorney is not the State Board of Elections!

I suspect what you will witness in this video will be both shocking and comforting.  The ability for the public to vent their concerns and actually have an interaction with their elected officials is a welcomed site in this day and age of cover ups and deception.

The shocking part is when board members think they can start screaming that they are going into in executive session just because they don’t like the way the conversation is going.  That is illegal and the watchdogs didn’t hesitate to let them know straight away that it was wrong.  When board members take the path that they can simply throw everyone out of a meeting with no legal foundation to do so, then it becomes evident that they are not representing the people, but more than likely their own interests.

I believe we prevented that action from happening and we are proud to be able to stand by people who care enough about their town to actually come to a meeting and voice their concerns.  Shame on the board member for clearly disrespecting their right to express their opinions!  He should resign!

The watchdogs will be filing a formal complaint with the Attorney Generals Public Access counselor for a clear violation of the Open Meetings act.  A board member clearly made a motion to take action on an item that was never mentioned anywhere on the agenda and that motion was seconded and voted on, in spite of being informed it was illegal.

I would contend that such a disregard for the law is Official Misconduct based on the fact they were notified the action was illegal and violated the OMA statute and they shoved it right down the throats of the people anyway which means they recklessly failed to perform their mandatory duty as required by law, which is to follow the Open Meetings Act.   In fact, they did so even after the Mayor agreed that the action was not legal.

Enjoy the video as it’s a meeting like no other!  Congratulations Mayor for real and honest transparency!

Bottom Video is the complete meeting (low quality because of my upload speed and the length of the video). 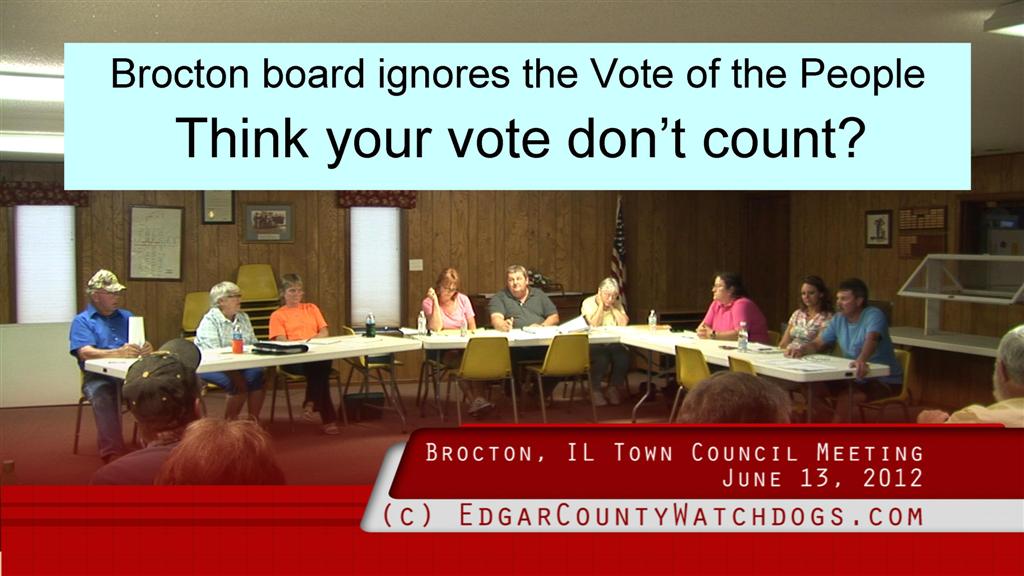