More Lawsuits under the watch of former Sheriff Tim Crippes

A Civil Rights Lawsuit has been filed against the now convicted jailers Jason Ball and Kent Rhoads as well as former jail administrator Terry Weger, who we believe is also currently running for County Board.

Courtney Utterback, while serving her sentence for a Class A misdemeanor of sexual abuse,  has filed a civil suit alleging the three named defendants violated her 8th amendment rights.

One month into her incarceration Jason Ball took photographs of her while she was naked according to court records.  “The photographs served no legitimate penological interest but rather were for his own personal benefit”.  That may well be the case considering Jason Ball was just recently found guilty of a class 3 felony for sexual misconduct with another prisoner.  Felony Conviction

It’s also reported that both Jason Ball and Kent Rhoads forced her to have intiment sexual relations with them and also outlines both officers provided drugs and alcohol to her.

Records also reflect that Terry Weger refused to allow her the opportunity to have the mental health counseling outlined in her sentence.

The court filing can be downloaded here.

Questions raised for this community:

1. How does the past Sheriff Tim Crippes sleep at night?  The number of sexually related criminal and civil suits against Edgar County Deputies and Jailers has to be an all time record for a single Sheriff.

2. Wasn’t Tim Crippes involved in his own extra curricular activity with a county employee during his term in office even though he was married?  Maybe that great leadership rubbed off on these other folks.

3. All are presumed innocent until proven guilty but considering two of those named in this case just got convicted for similar crimes we must ask at what point will the people of this county stand up and demand accountability from those running things?

Many have implied that the reporting of the Watchdogs has no merit or validity.  In fact, it’s been reported that top officials in the court-house take that position when we expose nothing but the truth.  Please, prove us wrong!

We have been threatened with defamation lawsuits as well as physical violence and I am here to tell you, we are not going away and will not be silenced.  We are going to continue to expose and report events in this county regardless of those threats.  The stories yet to be broken are so unbelievable we will be shocked if the authorities even think about continuing to ignore the facts of criminal wrong doing.

All we have to do is look at the history of this county to see why we have the culture we have.  It’s one of elitism based on who you are in the community and the hell with the law.  Those days have changed.  No matter how anyone feels about Herb Whitlock and Randy Steidl, it’s clear people failed to do their job then and we are now paying for it.  How many other cases are going to be ignored and what is the price we are going to pay?  I argue the price we have paid so far is the very culture we have now. One that chooses to overlook corruption based on who it is, not what they have done.

I give you my word we are not going away and we will not sit idle while crimes against the people in this county continue.  We will not be intimidated nor bribed with offers of positions on certain boards.

The Truth has no Agenda, and we are going to expose it all! 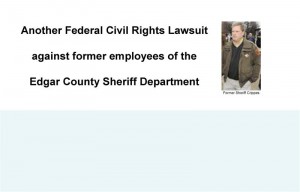