After futher inquiries into the Refuse Hauling Ordinance and multiple FOIA requests we discovered that the rates for using the Transfer Station have not been legally increased, in quite some time, as required by the contract signed between the City of Paris and Ingrum Waste Disposal.

The Ordinance Appendix A, dealing with the rates for using the Transfer Station are drastically different compaired to what is actually charged.

The contract, on page 2 - #4,  states that if IWD desires a rate increase it must first petition the City of Paris for the increase, and they must approve the increase before the new rates can be charged.

I submitted a FOIA request for all rate increase petitions, and the City approvals for those increases, and was told that they do not exist.

Does that mean all of the transfer station customers since 1989 are due refunds?

The difference per pickup truck load is in excess of $80.00 per load - that's alot of refunds.

The rate increase petition for 2012 has been submitted and will most likely be approved at the City Council meeting on Monday night, Jan 9, 2012.

(A)     Fees shall be charged for the use of the city transfer station in the amounts indicated opposite the following categories of vehicles only.

(B)     Notwithstanding the above itemized fee charges, all refuse compaction units will be charged the rate of $2.45 per compacted yard for the use of the city transfer station. 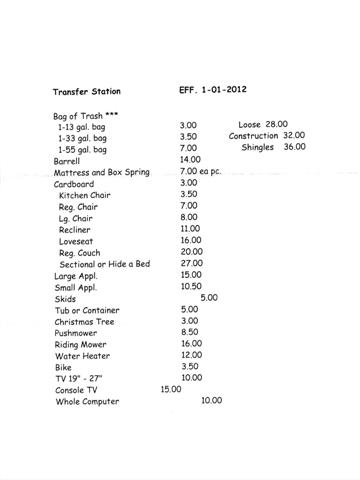