What does reading a set of minutes really tell you?

In some cases just the basics but when investigated with the most basic level of questioning and research it’s quite interesting what can be discovered.

Notice that the journalist in the video covering the Dispatcher Certification report, reports that Nanette Beals claims it was poor policing on behalf of the Illinois Department of Health regarding the laps in the Dispatcher certifications.

Poor Policing on behalf of IDPH? Really? 911 Minutes from July 2001 (See Below) reflect that Nanette Beals reports to the board that EMD (Emergency Medical Dispatcher) re-certification class will be July 26.

So how is it that the 911 Coordinator is aware of a re-certification requirement and tells the board about the upcoming class yet when the lapse is exposed no one steps up and takes responsibility but instead puts the blame on a state agency that is not responsible for ensuring they stay certified? Anyone can call them and verify it’s not their responsibility!

Where is the accountability?

Records also reflect, year after year to current date that the coordinator is doing a fine job and is deserving of a pay raise pretty much every year since being hired. Will a 5-6 year lapse that exposed the county to potential liability issues affect her evaluation this year? Time will tell but does all this responsibility really fall on her shoulders? I tend to think not and I think the record supports that!

Nanette then asked the Board for direction on re-training of dispatchers. She does make a suggestion, although inconstant with state law mandates, its clear she was asking for guidance from the board.

Those minutes reflect that Mr. Clark specifically points out that the training issue for EMD training issues WOULD become a policy for 911. Both Karl Farnam and Tom ???? will be involved in writing this policy because it would involve their dispatchers. To date no such policy can be found and no further reference has been found in the minutes!

So, if the Chairman of the 911 board stated that the training issue would become a policy and it never did who is really to blame?

Clearly not the IDPH!

I would also say not Nanette Beals (Crippes) if no policy was created!

I think the facts of the record answer the question. It would point to the Chairman of the Board!

You be the Judge!

Another Example of what can be found in the SAME set of minutes:

If your wonder why the reference of Nanette attending the Great American Duck Race and Children Festival is highlighted we felt it necessary to share how a simple statement in a set of minutes can lead to exposing misappropriate use of 911 funds. Yes the statement appears to have no financial implications however a FOIA request has proven that the June 2001 minutes reflects something quite interesting. Why a FOIA request over a simple sentence in the minutes? Because it’s out of place! Why would the 911 board have ANY interest in Nanette attending the Great American Duck Race? That is the question that raised the eyebrows!

Our Edgar County 911 Board approved use of 911 funds to purchase DUCKS in the Great American Duck Race!

So is it safe to say the Board Members of our 911 System used Emergency Telephone System money on a game of chance? Yes, in our opinion. Can ANYONE please show us where in the state statute such an action is even remotely justifiable? ITS NOT! Where is the Accountability? Where is the Audit that should have caught this type of inappropriate expenditures? Oh, forgot, that’s another story yet to come!

What are you paying on your phone bill for a 911 Fee? How is your money being used? 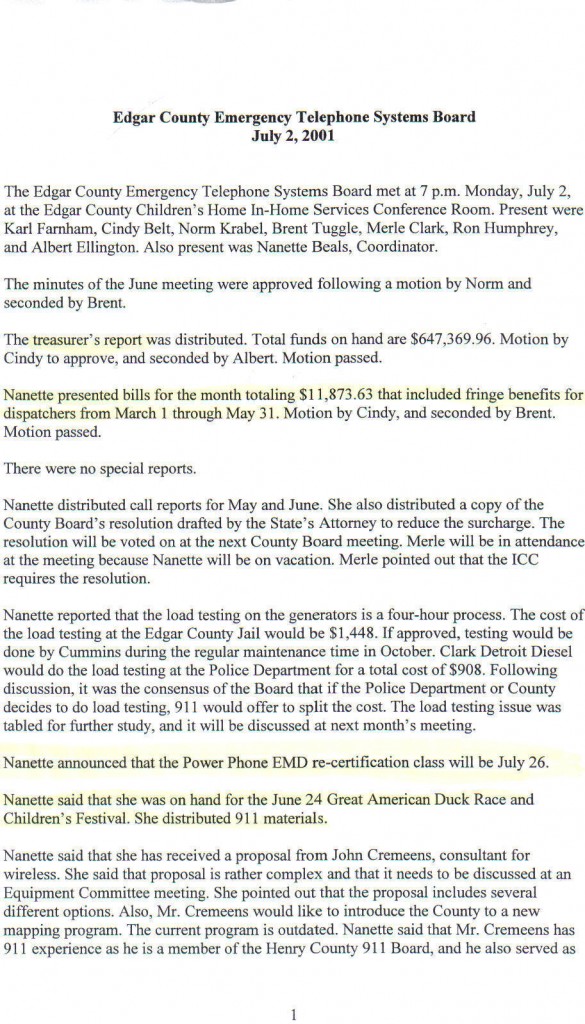 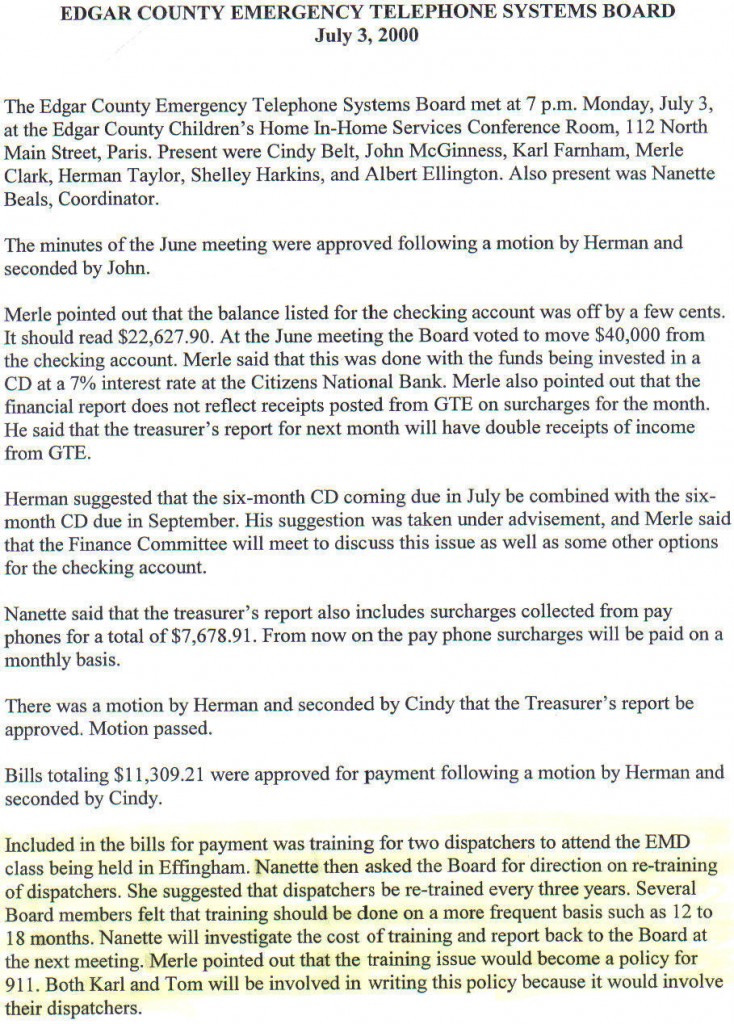 We had reported that it appeared that the 911 Coordinator may not have been fully responsible regarding the 911 Dispatcher certification matter however records have surfaced that clearly state otherwise.

The minutes from the ETSB dated January of 2003 “CLEARLY” represent that contrary to Nannette Crippes’s position that IDPH was at fault, she “KNEW” the requirements of the law as she presented that information to the ETSB during their regular meeting (page two, 2nd paragraph!).

Thanks to Cindy Belt for keeping such great minutes! 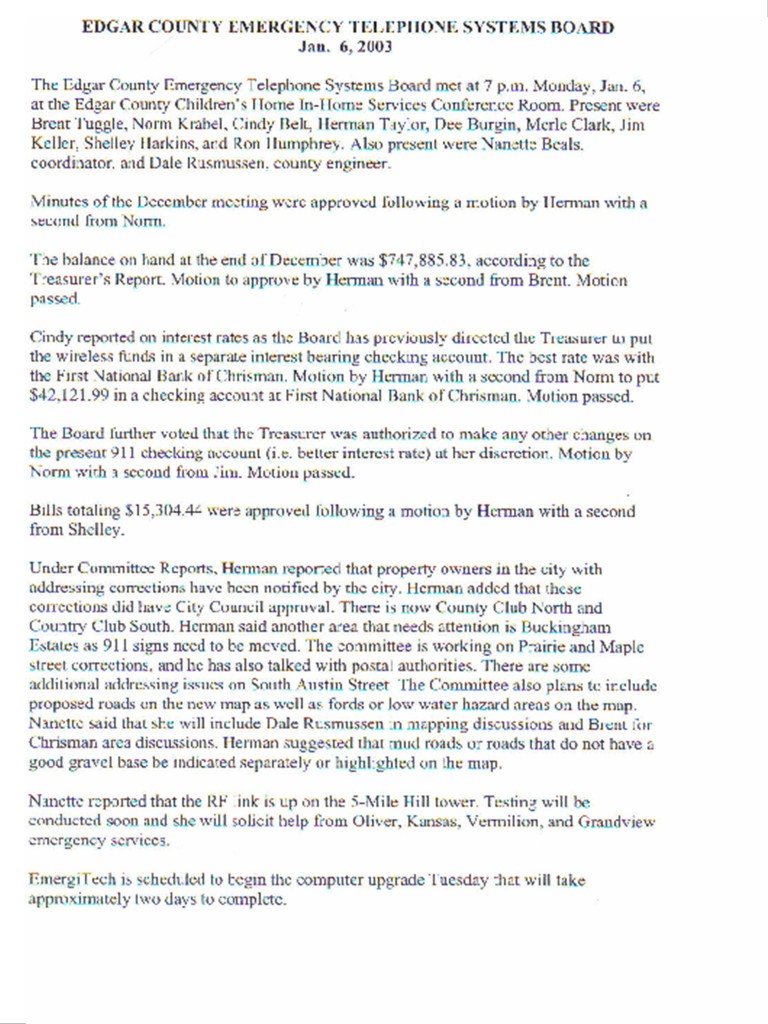 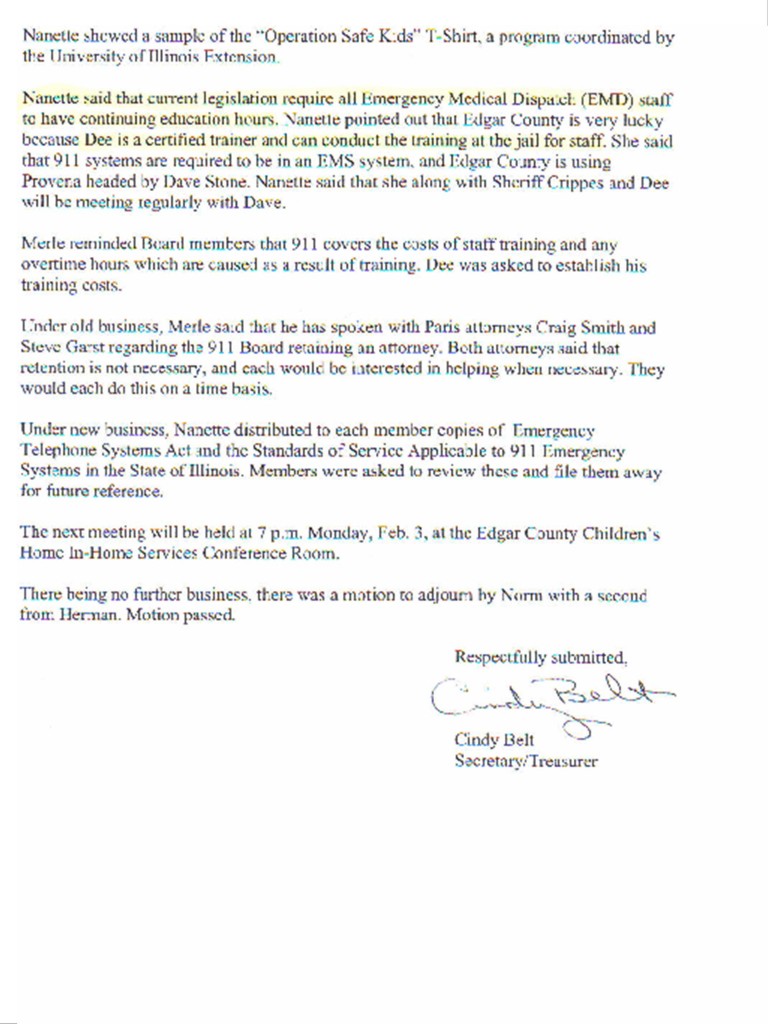