We urge everyone to pay close attention to this clear misrepresentation of case law by Shelby County State’s Attorney Nichole Kronke during her oral testimony before the Legislature.  This particular coverage of her actions exposes what may be the most egregious example of using select language from case law and attempting to imply it applies to the agenda she is pushing, when in fact the case in question appears to disprove her position.

She points to a case from the Fifth District.  While she does not cite the actual case by name, it appears the case being referenced is the Ofallon Dev. Corp. v City of Ofallon, (1976 case where quote came from, and 1979 case on the same issue). We say that because it is the same case the law firm hired in violation of state law by the Appellate Prosecutor to provide Kronke an opinion last year cited to. Additionally, we find no other Fifth District case with the quote she read which was as follows.

As I said in my testimony, “Often it’s not what we are told about a particular new piece of legislation but more importantly what we are NOT being told.”

What was the context of the statement she cites? (emphasis added)

“We believe the crucial test is whether the attempted use of the municipal property subserves the public interest and benefits a private individual or corporation only incidentally. If the private benefits are purely incidental to the public purposes of the act, then article VIII, section 1(a), of the Illinois Constitution is not violated. Because the constitutional provision is applicable with equal force to property held by a municipal corporation in either its proprietary or governmental capacity, the advertisement of St. Clair Square, Inc., on the water tower owned by the City of O’Fallon must subserve a public purpose or it is in violation of the Illinois Constitution, and the accepted rule of law governing the power and authority of municipal corporations in the regulation, management and use of public property. To allow municipal property to be put to a purely private use is uniformly held to be ultra vires the authority granted to municipalities.” (case law with quote)

That case was remanded to the lower court and ended up once again with the Appellate Court in 1979.  What did the court say?

“c) That the wording `St. Clair Square’ and the logo on said water tower is advertising and constitutes a purely private use of public property.”

“• 2 For the reasons stated above, we hold that the display of the emblems and writings on the water tower constituted an improper use of public property for purely private purposes and that the injunction was properly ordered to issue”

How special is it for an attorney to cite a single sentence in a case to support her position but fails to disclose that both the ruling and other cases cited in the case turn out to be contrary to her position?

Kronke then follows up the quote of one sentence taken out of context with this statement:

We wonder why Kronke didn’t point to a more applicable comparison from the same case it appears she took her quote from? (emphasis added)

“No public purpose is furthered and no public benefit results from private advertising by St. Clair Square, Inc., upon the property of the City of O’Fallon. In People ex rel. Healy v. Clean Street Co., 225 Ill. 470, 80 N.E. 298 (1907), the municipal corporation entered into a contract with a private individual for the placement of wastebaskets about the city. Under the contract, the private individual was given exclusive authority to lease the space on the wastebaskets for advertising purposes, the city receiving a portion of the revenue. The court held the private gain to the individual was not incidental to the public purpose of the contract as the pecuniary profits arose from the advertising in which no public purpose or public use was served. (See also State ex rel. Belt v. City of St. Louis, 161 Mo. 371, 61 S.W. 658 (1901).” 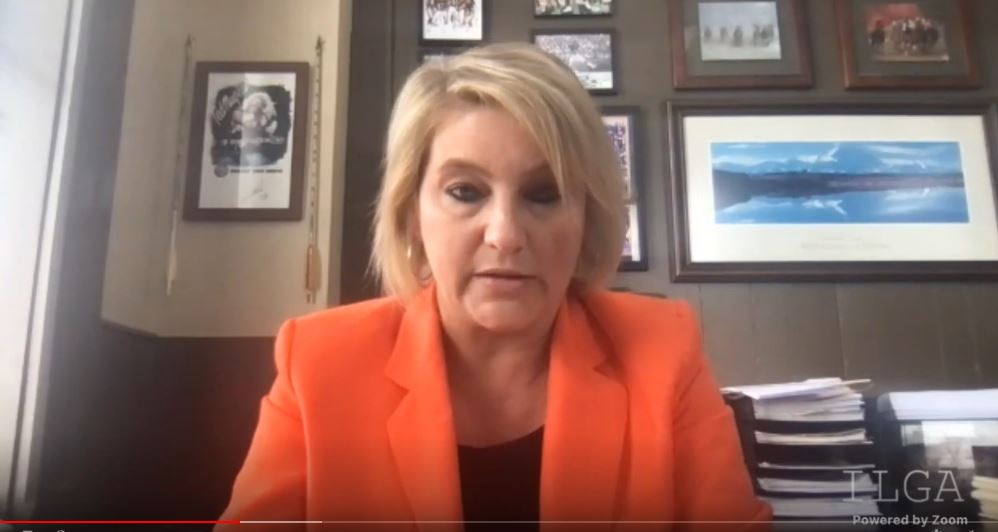