California Comptroller to Judge: We Can’t Locate Anything – 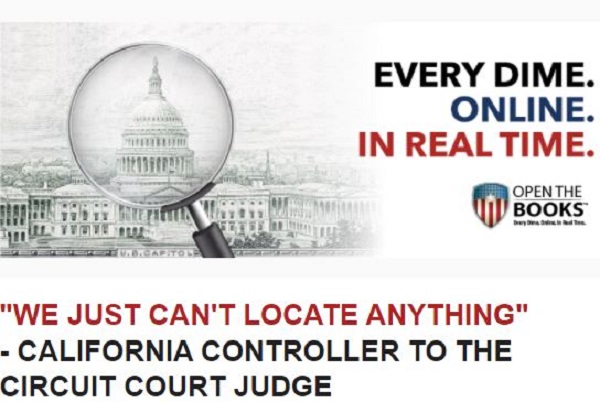 Reprinted with permission of Open The Books.

In 2019, the California controller rejected our freedom of information request for the state’s line-by-line expenditures saying they couldn't "locate" any of the 50 million bills they paid the previous year.

So, we sued them. (California is the only state not to produce their state spending subject to our open records request.)
Yesterday, California Controller Betty Yee's lawyers closed oral argument in the superior court, by effectively re-treading that most implausible argument:

We can't locate anything.

Not. One. Single. Transaction. A checkbook doesn't exist.

It's offensive to all of us.

It's also mystifying. Because the controller also admits to paying 50 MILLION bills last year!
We believe the judge will see the controller's implausible position.

During today’s hour-long oral argument, the judge asked the following questions of the controller's lawyers:

1. If the governor asks for a report on spending, how do you provide it?
2. How do you audit?

Bingo!
It's offensive — how the controller has treated our freedom of information request from the beginning and has refused to negotiate in good faith, even after the judge ordered them to do so.

We are hoping for a quick decision. The judge — who has been thoughtful and engaged — will issue an order on our petition for writ of mandate.

Our case to open California state expenditures to sunshine for the first time in history is HISTORIC.