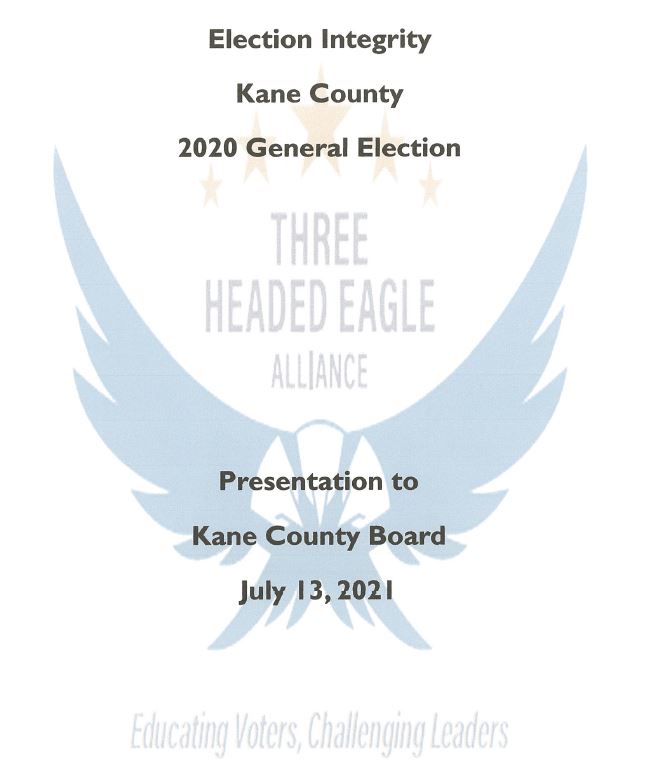 An election integrity report out of Kane County, Illinois, contains some very disturbing information.  The report was presented to the County Board, to include requests for a full forensic audit of the voting systems county-wide.  The report only covered 1 polling place with 6 precincts and it is believed with the problems identified in that one polling place there may well be widespread problems with actual vote totals. The report also contains Congressional Candidate Jim Oberweis’ filing after the discovery recount.  It identified anomalies throughout Kane County.

"In Kane County, there were (a minimum of) 39,647 mail-in ballots which were NOT initialed by any election judge, neither Democrat nor Republican. According to the Illinois State Legislature, all mail-in ballots (VBM) are required to be initialed to verify that the voter's information and signature are correct."

"On the spreadsheet(s) provided us, there are hundreds of voters over 100 years old, with some being as old as 121 years old who voted in the 2020 General Election."

The information in the report was obtained from a Freedom of Information Act request through an election integrity nonprofit known as "The Three Headed Eagle Alliance".  The Kane County Clerk has not been willing to produce all the records requested.  We understand additional FOIA requests are being submitted to get all the records as initially requested.  Specifically, the county refused to produce the requested records, poll tapes from the machines on election night, for all the polling places and only provided limited information for one.

Below are two videos from the Kane County Board meeting where key information is exposed which should raise a red flag on voter integrity.  If there is nothing to hide you would expect the doors would be open and all the records made available.  Unfortunately, that is not the case currently.

A copy of the report provided to the County Board can be downloaded at this link or viewed below.