Thaddeus Jones is positioned to become the first African American Mayor in the 120-year history of Calumet City, Illinois.

After a lengthy court battle, the Illinois Supreme Court has determined that Thaddeus Jones can have his name placed on the April 2021 ballot for election to the office of Mayor of Calumet City despite the November 2020 Referendum, which was not in effect at the time his nomination papers were filed.

Jones won the Democrat Primary for Mayor held in Feb 2021.

“The referendum became effective on November 24, 2020, the date the election was certified. Because Jones filed his nomination papers on November 16, 2020, he was legally qualified to run for mayor at that time. We, therefore, reverse the Board’s decision that his nomination papers were defective at that time. We likewise vacate the stay of the appellate court’s judgment and reverse the circuit court’s agreed order impounding the votes for Jones.”

The Referendum question was as follows, emphasis ours:

Since the Referendum was not valid until AFTER Jones’ nomination papers were filed, his name is on the ballot, and we believe Calumet City will lose in any further attempts at keeping him from assuming office should he win the April 2021 election.

CapitolFax is reporting that the Calumet City attorney is saying the issue is not clear if Jones can be sworn in if he wins the April 6 general election and retains his position as State Representative. We disagree and suggest the language of the Referendum speaks for itself in that it only prohibits a person from seeking nomination if “AT THE TIME FOR FILING NOMINATION PAPERS” . . .  (during a time in which this Referendum is actually valid and enforceable) – and the Supreme Court has said it was not enforceable when Jones’ nomination papers were filed.

Thaddeus Jones responded to our request for comment by stating:

Ultimately, the voters spoke on Tuesday, February 23, 2021, and the message was clear-they wanted a change in leadership in Calumet City.

The results of the elections in Calumet City are clear, I have won the Democratic nomination to become the first African American Mayor in the 120-year history of Calumet City!

I want to thank the voters of Calumet City for believing in me and for wanting a new direction for Calumet City.  I want to thank my family and friends for their loyalty and support.  My wife Saprina and sons Thaddeus Jr and Preston Jones.

I also want to thank Speaker Chris Welch, Senator Napoleon Harris, and Rep Rita Mayfield who played an enormous part in this election. 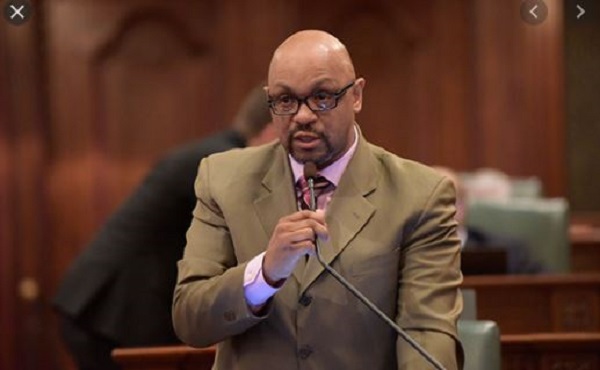