As a Veteran, I read with great interest the various mainstream media reports suggesting that the Pentagon banned the Confederate flag from all military installations, and today I read an article on how the Pride flag was banned.

All of the above article titles were written to convey to the readers a certain congratulatory sentiment or hate sentiment without a full understanding of what this new directive does and does not do, and how flags have always been displayed on military installations, which is what is needed to grasp what the “new rules” actually convey.

The memo merely defined which legitimate flags were permitted to be flown and displayed on military installations. This has always been the case as long as I can remember, with the exception of flag display on the outside of on-post housing (balconies, outside of windows, etc).

There was never a time, since my first enlistment in 1983, where other flags could be flown or displayed on military installations. There has always been the ability to hang any other flags/symbols within your private on-post living quarters or use as car window stickers, bumper stickers, etc. In my opinion, this new directive did not change any of that.

For instance, the Army has a flag regulation (Heraldic Activities) (here) which lists legitimate flags permitted to be displayed on Army installations. It lists flags authorized for display, in order of precedence, and other instructions on how, when, and where to display them. I am certain other military services have similar regulations.

Reading media articles, and worse yet only the titles to the article, at their face-value, will lead people to a misunderstanding of what is true, and what is not true.

My take on this new directive is that it simply restates what is already encoded in the various military regulations, with the exception of not authorizing other flags in yards, gazebos, porches, etc., on the military property (including housing).

Read the directive for yourself, but read it with the understanding that it is intended for a military audience, where terms like “display”, “depiction”, and “flown” may have a different meaning than what you may be used to. 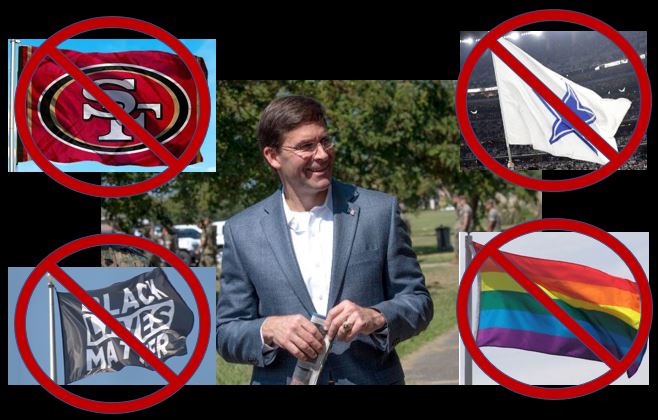