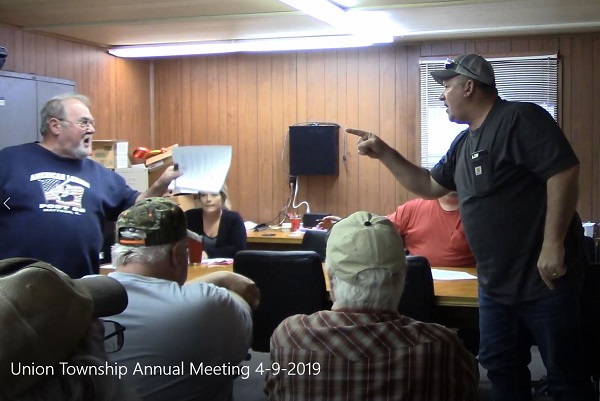 After receiving the financial reports, the Road Commissioner stated he needed funds to fix a broken tractor, which is estimated to cost around $10,000.

One resident took exception to the expense stating the RC should have had that in his budget. The RC disagreed stating that there was no way he could have predicted a tractor breaking down causing such a large expense.

The discussion turn heated for a few seconds, with the moderator calming things down shortly thereafter.

This is the beauty of the oldest and most direct form of local government in Illinois, the Annual Township Elector meetings, where people can speak their mind, openly, and sometimes in heated discussions, then return back to normal discussions of the business of the township.

Nobody was removed from the meeting, however, should the moderator wanted an elector removed, the Township Code provides that the only recourse for a disruptive elector during this meeting is their removal from the meeting, confinement in a convenient place until the meeting is over, and a fine of $10 (should the township seek to collect the fine).

View the entire meeting as recorded by Aaron Beard (here), or view the shortened clip below.

Later in the meeting, there was lengthy discussions on cameras and their placement within and without the township building.