The “Jeff Wood for Sheriff” campaign apparently submitted at least one false or incomplete D-2 Report to the Illinois State Board of Elections, this one in October of 2018.

Wood reported zero campaign donations for the duration of this 2018 campaign cycle, while at the same time running an advertisement in the Prairie Press thanking everyone for their generous donations and support in his reelection as Sheriff of Edgar County.

Wood has reported zero donations and zero expenditures since January 1 of 2015. Each quarterly report carries the same balance of $32.10.

During this election, there were many campaign signs in yards, campaign ad on the electronic billboard, numerous newspaper ads, etc., which makes it extremely hard to believe there were no expenditures during the campaign cycle.

After the election, he even ran a color advertisement thanking everyone for their generous donations and their vote (see it here). This ad is in the November 10, 2018 edition of the Prairie Press.

His most recent D-2 report, signed by him on October 10, 2018, and attesting to its accuracy with the verification that it is true and correct, and understanding that a false or incomplete statement is subject to a civil penalty of between $1001 and $5000. (see it here).

The Edgar County Democrat Central Committee donated $499.00 to his campaign on August 27, 2018 – which means it should have been reflected as a contribution on Wood’s D-2 for that time period. It wasn’t. (see the donation here)

In true Edgar County form, laws don’t seem to matter, even for its Sheriff.

When asked, Sheriff Wood indicated to me that his next report would reflect the donation from the Central Committee. 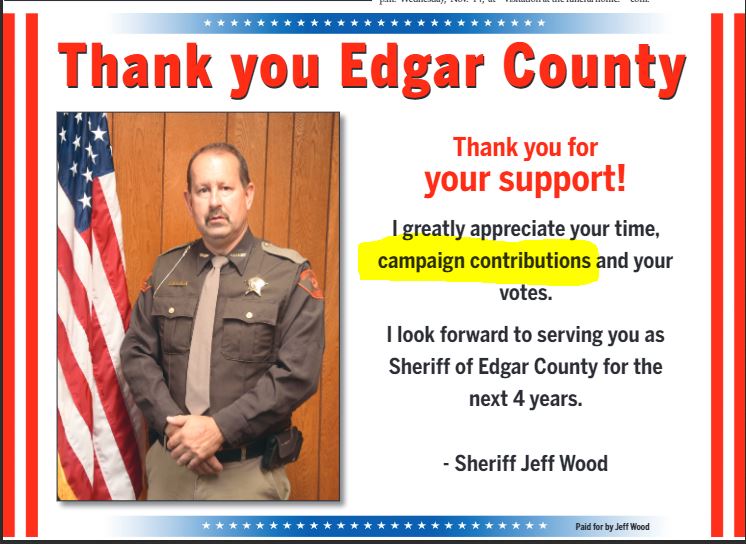