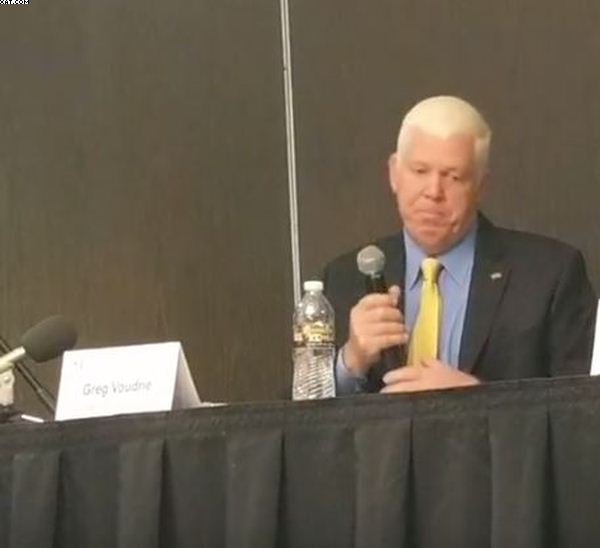 We have all seen what happens to “some” people who lie to the FBI during an investigation and most know it's not good.

During the Sheriff Candidate forum held in Charleston, IL. (Video below), candidate Greg Voldrie addressed the FBI class he took and misrepresented certain requirements related to the attendance of that class and by all indications of the paper trail, violated the agreement with the FBI found in the application he signed.

“Do you agree to remain in law enforcement for a minimum of 3 years after graduation from the National Academy? Yes”

Voudrie claimed the FBI required an agreement that you're going to provide two more years in law enforcement.

That is factually false.

Voudrie’s signature confirms he agreed to “remain” in law enforcement for three years and his own words and the paper trail points to that requirement not being complied with.  (See application with agreement on page 4 at this link)

The term "remain" has meaning and it does not mean to take a break for almost two years and then enter back into law enforcement.  The word "minimum" also has meaning, as it is the least acceptable amount of time.

Voudrie was accepted for attendance at the FBI Acadamy October 16, 2012.

Is a November 30, 2012, contract Voudrie signed with the city an indicator that the city had reason to believe the assurances told to the FBI were not quite what they claimed, assurances of remaining in law enforcement for three years?

Voudrie claimed both the Police Chief and the Mayor knew of his intention to run for Sheriff prior to attending the FBI Acadamy.  If they knew he was going to run for sheriff, how do they have any assurance Voudrie would remain in law enforcement for a minimum of three years as there is no assurance he would win the election?

It is clear there were questions of concern regarding compliance with the three-year mandate as the City required a contract be signed that required Voudrie to repay all of the expense for attendance if he does not stay with the Mattoon Police Department three years after the class dates. That document found at this link was signed November 30, 2012;

Voudrie retired in June of 2013 and it was acknowledged by the City of Mattoon in the minutes of July 2, 2013.

At that point, Voudrie was NO LONGER in law enforcement.

Voudrie did not remain in law enforcement for three years as required by the FBI for attendance to the class in question.

During the candidate forum, Voudrie clearly misrepresented the requirement when he says the obligation was for two years and that it could be fulfilled by working for any police department.

He remained for three months!

The agreement was for a “minimum” of three years of service and it is clear Voudrie did not meet the minimum obligation he agreed to and clearly he misrepresented those obligations and his claimed compliance during his presentation to Coles county voters.

And for the record, being a member of the Auxilary Police does not qualify for remaining in law enforcement as auxiliary officers DO NOT possess “conservator of the peace” powers, thus they are not in law enforcement.

Voudrie was not in law enforcement between June of 2013 and April of 2015.  His own paper trial proves he did not remain in law enforcement a minimum of there years after the FBI class, thus violating the very agreement he made with the FBI.

If a Sheriff Candidate breaks an agreement with the FBI and misrepresents to the voters the issues surrounding that agreement is he worthy of being your Sheriff?

Jeff Branson, Police Chief at the time, signed Voudrie’s nomination to attend the FBI Academy on 2/07/2012.  Included in that document are some interesting statements and requirements that clearly dispute the statement made by candidate Voudrie during the candidate forum.

“Specifically, I understand the nominee meets the following minimum requirements:”

7. “Agrees to remain in law enforcement a minimum of three years after graduation from the FBI National Academy;”

“I have been assured by the nominee that he/she will remain in law enforcement for a minimum of three years following graduation from the National Academy.”

Note the Police Chief signs his name to the nomination document with the assurances of the nominee, Greg Voudrie, that he will “remain” in law enforcement a minimum of three years.

Prior to Voudrie’s attendance, it became clear by the establishment of the repayment contract the city had concerns over the three-year obligation.  While the city took steps to protect the taxpayers if Voudrie violated the terms for attendance, which he did, there is no indication anyone informed the FBI of his failure to comply with the minimum three years to remain in law enforcement.

Voudrie touts this FBI Acadamy attendance as a major accomplishment in his resume however his attendance and failure to comply with the terms of such attendance should raise serious concerns.  If he can't be trusted to comply with agreements with the FBI and then misrepresents the facts behind that attendance, how can he be trusted for other matters in the field of law enforcement?

Of additional interest is Voudrie making a point to show people he paid the city back per the agreement of the contract yet we have been unable to confirm the city ever paid the FBI the expense payment made by them to Voudrie for $364.53.  That payment was recovered by the city however it should have been paid back to the FBI, the ones who incurred the expense.  May we suggest the City of Mattoon return those funds as they are not attributable to any city expense but rather a payment by Voudrie for failure to comply with terms of an agreement signed by Voudrie. (Note the note below the check at this link that confirms the expense was paid by the FBI.)

When you closely compare Voudrie’s words and the actual paper trail, it is clear he got caught violating the FBI agreement and is providing damage control in hopes no one catches it.

I would say Sheriff Rankin rightfully questioned Voudrie’s violation of the agreement with the FBI.