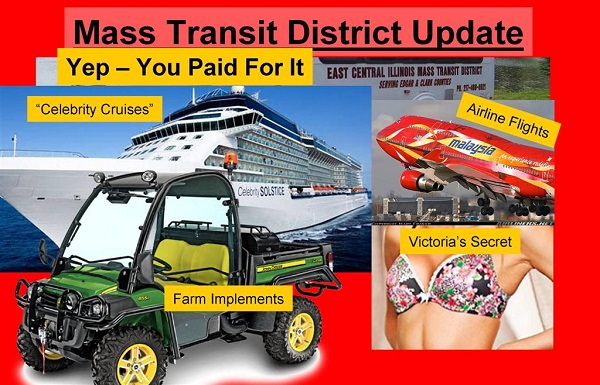 Kami Miller and Ashley Miller (yes they are related) both pled guilty in Federal Court, the United States District Court for the Central District of Illinois, Urbana Division of crimes against the former East Central Illinois Mass Transit District.

We wrote about these crimes starting back in 2012 - more than 5 years ago (here, here, here, here, here, and here) - which included the fact that some appointments were made to the ECIMTD Board creating conflicts of interest and illegal billing to townships.

At the time we were exposing these crimes, people told us we didn't know what we were talking about and that it wasn't a big deal. Turns out we did know, and it is a big deal.

One issue we hope the Edgar County State's Attorney takes up, is the disposition of any and all restitution funds. In our opinion, RIDES Mass Transit District has no legal claim on these funds, and the county should petition that the county received the funds - short of the federal government petitioning for them (since it was federal funds they were spending).

Ashley Miller was sentenced to 3 years probation, 8 months home confinement, shall not incur debts or line of credit in excess of $250, assessment of $100, restitution of $51,141.58, and forfeiture of passport.

Miller was directed to make restitution equal to at least 50% of her disposable income per month during the entire term of her probation or until the restitution obligation is paid in full.

The court document says restitution of $36,141.58 to RIDES Mass Transit District, however, as we have written about previously, those funds rightfully belong to Edgar County, or to the federal government. It is our opinion that RIDES MTD has no valid claim on any of the recovered funds.

Kami has yet to be sentenced.