This one involves real estate taxes and the paperwork required to be submitted on an annual basis to the Logan County Supervisor of Assessments (“SoA”).

Each year, local governments must submit a certification of exempt use of property, and that certification must include a statement on whether or not the property was “leased, loaned, or otherwise made available for profit” and also submit copies of any leases or other agreements [35 ILCS 200/15-15]. The failure to file such leases could be cause to terminate the exemptions. 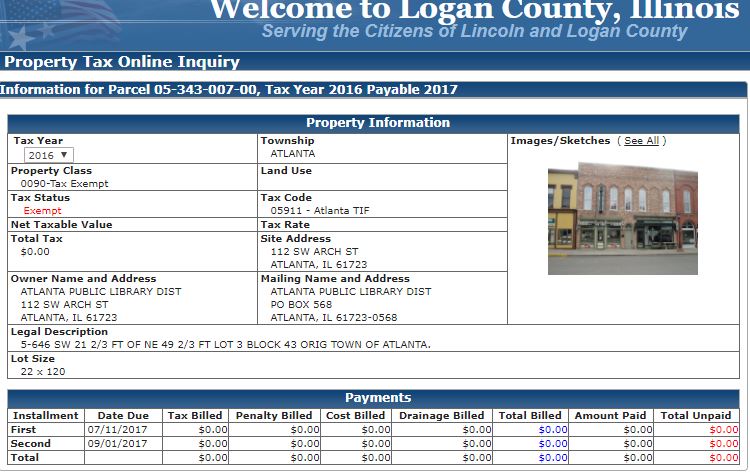 Changes in the use of the exempt property must be filed with the SoA within 90 days of such change [35 ILCS 200/15-20]. Section 15-66 is where it lists Public Library Districts as exempt “All property used exclusively for public purposes” – we will discuss the Grill restaurant below.

Each annual certificate is for an exemption for the prior tax year, so a 2017 certification was for the 2016 tax year.

The Atlanta Public Library District has, at least as far back as 2012 (for the 2011 tax year), filed its annual certification stating “NO” to the question “Is the property now leased?” We know this to be inaccurate.

The 2017 certification was signed by Randy Brooks, Library Board Chairman.

We did not find that any reports of changes in use given to the SoA as required by law if there was a change after the annual certification.

We suggest, based on the available paperwork, that the Palms Grill was not “used exclusively for public purposes” and was “leased, loaned, or otherwise made available for profit.”

In our opinion, the square footage of the Palms Grill should have been taxed and the leaseholders are responsible for paying the tax.