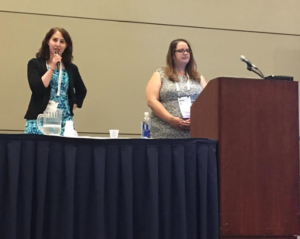 (Katie McLain (left) and Amanda Civitello (right), presenting at the ALA conference in Chicago, June 2017)

Katie McLain (Reference Assistant) and Amanda Civitello (Waukegan’s Marketing and Communications Manager) opened their remarks to the packed room with the story of what it’s like to be a public librarian and having to tell friends and family about working in a sexually hostile work environment (when no one in America, under the EEOC Act, has to suffer like that).

McLain talked about being out to dinner with friends and sharing stories about male library patrons sexually harassing her and feeling like she was required to take that abuse as part of her job. Her friends — all people employed at private companies or in other lines of work besides librarianship — were gobsmacked that McLain felt that she had no recourse and had to just put up with sexual harassment on the job because it was coming from the public. “Haven’t you heard of the EEOC? You don’t have to take that abuse, Katie,” she reported her friends repeating over and over again. But the two presenters confronted the ugly truth about public libraries: for whatever reason, employees are still being told by management or otherwise pressured to feel that they do have to take that abuse or lose their jobs.

This presentation by McLain and Civitello appears to be the first time that the ALA has ever addressed the issue of librarians being sexually harassed in the workplace and feeling like they were required to shut up and suffer the harassment. McLain and Civitello reported that during their research on the topic they found few articles written about the matter in the last 10 to 20 years: it appears for the most part that the ALA has ignored this subject or aggressively tried to pretend that it’s not happening and these female employees are not being sexually harassed in the workplace.

Last year, the book SHUT UP!: The Bizarre War that One Public Library Waged Against the First Amendment was published, containing case studies from the Orland Park Public Library where at least two female employees reported being sexually harassed in the workplace and told by management that they had to “like it or lump it.” One former OPPL employee, Linda Zec, came forward during an open public meeting and excoriated the library for being a place where female employees were forced to work while men were allowed to sit a few feet away pleasuring themselves at computer screens to pornography. Zec reported that the men then ogled the female employees, stalked them, and made them so uncomfortable that they wanted to hide from these “creeps” in locked rooms. It goes without saying that no woman should ever have to endure this. Forcing an employee to suffer like this in the workplace is not legal under the EEOC Act.

McLain and Civitello conducted a survey of library employees that produced interesting results, obtained via FOIA production. A pattern emerged in these responses where it quickly became clear that public libraries run by managers who are part of the Baby Boomer generation are libraries where female employees are more likely to be told that they have to take the sort of abuse that Zec reported or lose their jobs. Libraries where the management is part of the Gen-X or Millennial generations seem to have a more sensible and pragmatic approach to the sexual harassment problem and do not allow members of the public to harass librarians.

Sanity appears to be making a comeback with younger generations, however, who appear to believe that sex belongs in a private home and not a public building and that no person in America should be forced to work in a building where members of the public are allowed to be openly masturbating just a few feet away. Even waitresses at the sexually-charged Hooters restaurant chain do not have to endure the sort of abuse that library employees like Linda Zec and others endured at the Orland Park Public Library. When library employees are treated worse than Hooters waitresses on the job, public libraries have a sexual harassment problem they must address.

The overwhelmingly positive response that Katie McLain and Amanda Civitello received for their presentation was followed by an extended question and comment session that could have run all night but was limited for time. Dozens of library employees from around Illinois and across the nation jockeyed for time at the microphone to tell their horror stories about encountering sexual harassment from library patrons…and often having to later deal with Baby Boomer library management that wanted to downplay the events, hide them from the record, and tell the employees that taking such abuse is just part of their jobs. In addition to library employees being made to feel uncomfortable by male patrons openly viewing pornography on library computers (a problem that plagued Orland Park for many years), the female employees told stories about being stalked by members of the public who would continuously ask them out on dates or comment suggestively on their appearance and make them feel unsafe in the workplace by following them around the stacks or lurking around corners. Some male library employees also reported instances of themselves (or other male coworkers) being stalked and sexually harassed by members of the public as well.

McLain and Civitello encouraged library employees to complete internal incident reports whenever they feel harassed or threatened in the workplace to apply pressure to library management to do something about this longstanding problem. The Orland Park Public Library had to be taken to chancery court to be compelled to produce embarrassing documents such as these, but if a public library is keeping track of incidents of sexual harassment against its employees then a paper trail would exist that could be obtained via the Freedom of Information Act.

A concerned and engaged public should come to the aid of these sexually harassed librarians and confront the local library board and village/town management about what’s happening in their local library, if such incidents of harassment are ongoing wherever you live like they plagued Orland Park for many years. What’s clear from McLain’s and Civitello’s presentation is that this is a widespread problem and it’s hit or miss whether library management chooses to put a stop to the sexual harassment or if that library is run by Baby Boomers who willfully ignore what is going on and allow this to keep happening like in Orland Park.

The public can break that logjam by attending library board meetings and demanding change at the local level. No community should pay to operate a public library that degenerates into a masturbation lounge or sexually harassing work environment for employees. Those are multi-million dollar lawsuits just waiting to happen as librarians are becoming more wise to the fact that the EEOC Act does not allow for any employer to subject employees to such abuse. One day library employees are going to band together and start suing the libraries that allow this abuse to fester and taxpayers are going to be stuck with the bill for all of those lawsuits.

The way to avoid all of this is to demand public libraries put their employees first and provide safe and professional workplaces. The public has no right to stalk women or use libraries for sexual gratification when those buildings are meant for intellectual stimulation and not the free and easy commission of crimes or facilitation of sexual harassment.