His most recent scandal involved the firing of a water department employee, without notice, leaving residents and council members wondering if it was in retaliation of the employee voicing his opposition to the Mayor allegedly changing his own water bill, and getting the water billing policy changed in order to benefit him thru lower water rates at an apartment building.

He was also earlier arrested and charged in Hancock County with official misconduct for his unlawful use of public property and personnel for private purposes when he was photographed with the city backhoe in his yard digging next to the foundation of his private residence. He admitted to using the backhoe for personal use and attempted to write a check for $50 to the city for payment. 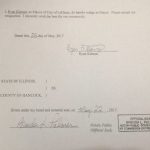