July Ajster, a local attorney who stood up to former LaSalle County State’s Attorney Brian Towne, was the subject of multiple political Facebook posts and reminders in newspaper articles during the last election with claims of perjury.  Brian Towne made sure to let the world know that this particular attorney, who had become a thorn in his side, was facing perjury charges, insinuating that you could not believe what she says.  Towne supporters also dog-piled the perjury message on the internet in an effort to discredit the truths being told by Ajster regarding Brian Towne and his questionable actions as Prosecutor. You could not pick up a local paper or read Facebook without people implying Ajster was a criminal because of the perjury charges.

Those charges were from the Appellate Prosecutor’s office, which Brian Towne just happen to be the Chairman of the Board for that agency at the time in question.  Do we need to mention he got hired by that very agency after he lost the election? The charge from the Appellate Prosecutors office had all the fragrance of a political favor and it would appear that was the case after reading the motion filed in court.

Today a motion to nolle prosequi was filed in the case and the courts ordered the case closed!

Nolle Prosequi – “Latin Latin for “we shall no longer prosecute,” which is a declaration made to the judge by a prosecutor in a criminal case (or by a plaintiff in a civil lawsuit) either before or during trial, meaning the case against the defendant is being dropped. The statement is an admission that the charges cannot be proved, that evidence has demonstrated either innocence or a fatal flaw in the prosecution’s claim or the district attorney has become convinced the accused is innocent.“

We find the prosecutor’s filing most interesting and can only wonder if Brian Towne’s influence to have this case prosecuted has deeper political roots?

“It is noteworthy that the prosecution made a request for an appointment to interview Judge Jansz as a material witness in this case and the request was denied.  I  was told by a court administrator that Jansz would not agree to meet with me and any questions I may have should be resolved by the record. Based on reading the record of the two bond hearings and the failure of Jansz to agree to be interviewed by the prosecution in reviewing this case, there is no evidence that Jansz even read Ajster’s affidavit from April 29, 2015. In addition, Ajster never made any arguments to the Court during the two bond court hearings about the statements Brett King had allegedly made to her when making her argument in support of French’s bond reduction.”

“It is also noteworthy that the first special prosecutor, Dave Neal, alleged that the first count of perjury occurred on April 29, 2015, yet, he did not seek a bill of indictment until November 3, 2015, for two counts of perjury, both class 3 felonies. It was also unusual that a warrant was not issued for Ajster’s  arrest and a summons was issued to notify her of the first court date of December 3, 2015.

Reading this filing appears justice has been served as it relates to the allegations against Julie Ajster, however the bigger question we have is will Brian Towne ever have to answer for the inappropriate spending and distribution of county funds that clearly led to his losing of the election. 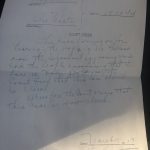