The Mayor of Wheeling, Illinois,  Dean Argiris, has used the city credit card for personal and private business purposes. As if that wasn't bad enough, when questioned during public comment in the January 16, 2017 meeting, he told the public that he had already reimbursed the city for his most recent personal purchase of $462.00 at Tuscany's on October 22, 2016.

Sure enough, when a copy of the check was requested thru FOIA, it was dated December 22, 2016 - a full 60 days after incurring the debt.

That's where is gets a little tricky...

The back of the check showed it was deposited on January 18, 2018 - which made us wonder why the city would hold onto the check for so long prior to depositing it - especially when the law requires timely deposits. 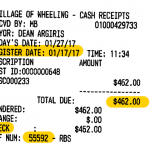 So I asked for a copy of all his reimbursements, and what I received showed he actually gave the check to the city clerk on January 17, 2017 - not on December 22, 2016 as the check was dated (unless the clerk is willingly violating state law - which we don't believe is happening).

You can see the back of the check, here, and it shows it was deposited on January 18, 2017 - so unless the clerk held the check in violation of law, then Mayor Argiris lied to the public by claiming he had already reimbursed the city for his Tuscany's dinner.

This isn't the only illegal purchases made using the public credit card - he has also used it in his private employment capacity as evidenced by a reimbursement just last November by a company named "AIM Insurance Agency, Inc." There were three checks from that company for reimbursements on behalf of Mayor Dean Argiris - two in 2014 and one in Nov 2016.

The city of Wheeling is financing his personal use and his business deals with the public credit card, when their policy on purchase card use clearly states personal purchases are unauthorized (see page 4). Why isn't the city council concerned about this blatant violation of Article VIII, Section 1(a) of the Illinois Constitution? Do they not realize these acts can be used as a predicate for felony Official Misconduct? - and now they have become enablers of this bankrupt Mayor?

This is only one of many articles to come on Mayor Dean Argiris and the irresponsible city council of Wheeling, Illinois. They are all complicit in this activity and we will highlight each and every one of their recent activities in the coming weeks.