RIDES v. Edgar Co. – What really happened in the Courtroom –

We will cover several issues in this article, starting with what was reported in the local paper: 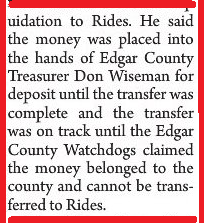 Prairie Press (PP): “. . . [Plaintiff’s attorney said] and the transfer was on track until the Edgar County Watchdogs claimed the money belonged to the county and cannot be transferred to RIDES. . .”

TRANSCRIPT (page 15): “. . . all of a sudden it’s some time in 2015 counsel for RIDES received either a letter or an email saying that there might be some issues with appropriating those funds due to knowledge that was brought to them by a local watchdog group. . .”

ECWd:  While we appreciate being named, by name, but the fact is the attorney for RIDES did not mention us by name in the court records as was reported by the PP. Yes, we were the ones that brought it to the county board’s attention, however, contrary to the RIDES attorney’s insinuation, we did not bring the issue up in 2015, we brought it up during county board meetings in 2013, 2014, 2015, and 2016.

As a matter of fact, the Director of RIDES was at the meeting on June 17, 2013, when we brought the issue of disposition of the remaining funds to the county board (see approx. 2:45 in this video). We quoted the statute and where it directed the remaining funds to go – so RIDES knew all along we opposed this.

PP: “. . .the Judge said the county does have the authority to direct the transfer of money from one mass transit district to another.” – “”That can happen,” said Glenn. . .”

TRANSCRIPT (pages 20 and 21):  the above language reported by the PP is not what is in the transcript. “In this court’s view, the county does have authority to adopt a resolution directing the county treasurer to transfer moneys from a dissolved mass transit district to a successor mass—mass transit district”.  Additional qualifying language from the court was conveniently left out of the PP reporting, like “There does have to be a legitimate purpose for exercising that authority but I do find that it is, AND BASED ON THE AUTHORITY THAT’S BEEN SUBMITTED, within the county’s power to do so. . .”

ECWd:  (we will have to agree to disagree with his statement) Judge Glenn qualified his statement by stating it could be done “based on the authority that’s been submitted” – meaning based on the papers in front of him at the time. He also said “that can happen“, but qualified it with “but for proper purpose” – which he later stated was never in the complaint or the resolution.  In granting Edgar County’s motion to dismiss, Judge Glenn said RIDES did not sufficiently set forth the offer, acceptance, and consideration. The county’s resolution was not an offer. The Plaintiff’s resolution was not the acceptance of an offer. Based on the circumstances, there is an inadequate showing of consideration (a requirement for a contract under the Intergovernmental Cooperation Act Section 5).

ECWd’s opinion on the remainder of the complaint:

Another issue:  RIDES’ reliance on the Downstate Public Transportation Act as giving them the authority to receive money from local governments. Read the Act, it is a short one, and it will become clear to the reader that the Act does not apply to this situation.

RIDES says Section 5 of the Intergovernmental Cooperation Act gives the county the authority (IT DOES NOT):

Section 9 of the ICA tells how Counties can contract and participate in intergovernmental agreements. The Resolution was not a contract or intergovernmental agreement, and even if it was, the Resolution did not comply with Section 9 because RIDES did not have the authority to perform the action since Clark County never officially passed an ordinance to dissolve ECIMTD.