For anyone interested in uncovering government corruption and observing public officials who show utter contempt for the public on a rolling basis, the Village of Orland Park is like a Chicagoland version of Peyton Place: there’s always someone up to something, someone trying to get away with something she shouldn’t, and someone doing mysterious things by a pool (thinking she’d never be caught because she assumes no one is watching what she does). Everything endemically wrong with Illinois as a whole is illustrated in the ongoing soap opera of bad government that is Orland Park.

Last week we broke the Lobstergate scandal, where Orland Park’s Director of Development Services, Karie Friling, was caught running up a $91.77 dinner tab in Las Vegas by stuffing her face with lobster tail, steak, and shrimp cocktail before making the public pay for all her butter-soaked gluttony. Yum!

At the time of this stomach-turning discovery, questions were raised about two mysterious bar charges on Friling’s hotel bill, which the public also had to pay for. No explanation was given for what it was that resulted in these bar charges and if it was food or if it was alcohol that was ordered from these bars on two separate days. 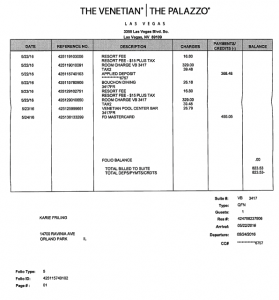 According to documents obtained via the Freedom of Information Act, Friling stayed at the extravagant Venetian Hotel (one of the most expensive hotels in the city, despite the Village’s travel policies clearly requiring public employees to look for affordable and reasonable accommodations when on the road). On 5/21/16, she charged $39.61 at the Venetian’s “Pool Service Bar”…and did something similar on 5/23/16 when she charged $26.79 to her room at the “Venetian Pool Center Bar.” Whatever she was doing, it appears to have been so much fun the first time that she had to do it again two days later. Yippee! 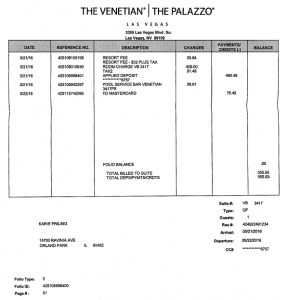 A Google image search for the Venetian’s poolside bars revealed them to be lavishly decorated places where hedonists in skimpy swimwear lounge by the pools enjoying libations and celebrating the good life. This does not look like the sort of place where Orland Park homeowners’ property tax dollars should be spent. In 2015, the Better Government Association (BGA) ranked Karie Friling as the 4th highest-paid public official in Orland Park; with her high salary (not even counting her platinum benefits package), she could clearly afford to take herself on a vacation to the Venetian Hotel in Las Vegas anytime she wanted without the public ever needing to pay for her to go there on the taxpayers’ dime. 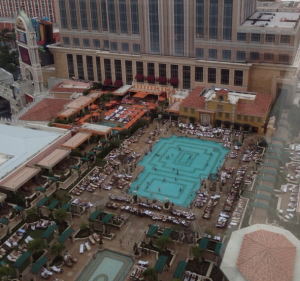 Curiously, the Village of Orland Park elected not to produce any receipts explaining what Karie Friling ordered on 5/21/16 and 5/23/16 that amounted to $39.61 and $26.79 respectively.  Those charges appeared on the hotel room bill, but there were no paper receipts breaking down what Friling purchased at the two different hotel bars. At least with her lobster & steak dinner, Friling produced a receipt showing that she had devoured lobster, steak, and shrimp to the tune of $91.77. But with her poolside bar charges, the public is apparently not allowed to know what Friling consumed because the Village elected not to produce any receipts.

A follow-up FOIA to the Village this week specifically asking for documents sufficient to show what exactly Karie Friling ordered at the poolside bars at the Venetian Hotel produced no documents. How is that possible when hotel servers present checks to guests by the pool even if they are signing the charges to the room? Why didn’t Friling keep those paper receipts and turn them in when she returned from Vegas like she is mandated to do? Or, if she did turn them in then why isn’t the Village of Orland Park FOIA compliance officer, Alexandra Snodsmith, producing those receipts when the public asks to see them?

It’s almost as if the public officials in Orland Park specifically don’t want the public to know what Karie Friling ordered on those two occasions when she twice charged something to her room from the hotel’s bars. That could make a reasonable person suspicious that perhaps Friling spent taxpayer money on something she should not have signed to her room (that was being paid for by taxpayers). The Village of Orland Park was asked to comment on this matter and to clarify what Friling did and what she ate or drank on those days, but they elected not to respond to the multiple requests for comment.

This is a pattern that Orland Park repeats again and again: when busted on something, they circle the wagons, close ranks, and stonewall. They seem to assume that if they ignore the public and never explain themselves that the public will lose interest in what they are doing and forget about it. Then they can lay low for a while…and return to the profligate spending at some point in the future when they think no one is paying attention.

It is now the year 2017. The Venetian Hotel has the capability to re-print the receipts for Karie Friling’s bar charges on 5/21/16 and 5/23/16. The Illinois Freedom of Information Act appears to require a public body to obtain documents from a third party (such as the Venetian Hotel) if the public body asserts that it does not have its own copies of those documents (but the public has asked for them and the public body knows that the documents sought are in the possession of a third party, such as a hotel). In the matter at hand, since the Village of Orland Park was specifically asked to produce Karie Friling’s questionable bar receipts then the Village has a duty to dial up the Venetian Hotel and ask for those receipts to be emailed to the Village so that the FOIA request can be fulfilled. By not producing those bar receipts when asked, it can be argued that the Village of Orland Park is once again in violation of the Illinois FOIA statute. 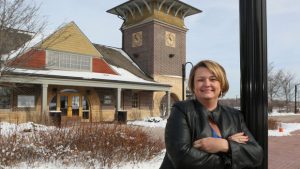 The public has a right to know if a Village of Orland Park public employee is buying alcohol by a pool and making the public pay for it. If she isn’t doing anything wrong, then why not just produce her receipts?

The Village’s policies and procedures manual prohibit purchasing alcohol with taxpayer funds. The very same manual also limits dinner purchases by public employees to no more than $25/day. That begs the question: why was Karie Friling allowed to eat $91.77 worth of shrimp cocktail, steak, and lobster if the Village only allows for $25/day worth of dinner spending? Why is she allowed to make charges to her room from hotel bars?

If Karie Friling is exceeding the spending limit and if she really did purchase alcohol, the Village’s written policies clearly indicate this would all fall under “non-allowable expenses” and Karie Friling should have paid for her lobster dinner as well as her poolside charges out of her own pocket, not from the public’s coffers. We need those bar receipts to see what’s going on.

The Village of Orland Park was asked again on 1/19/17 to explain why no receipts for Karie Friling’s spending were produced, why she was approved to eat steak & lobster, and what exactly she bought poolside in Las Vegas but no response was received from the Mayor, the public relations department, or the Village’s FOIA officer. 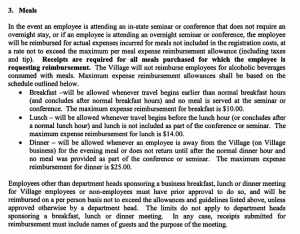