On 6/15/16, the Buckeye Community Hope Foundation (an Ohio-based developer that profits from exploiting tax-credit schemes in other states, such as Illinois) filed an amended complaint against the Village of Tinley Park. This new complaint replaces a poorly-written and meritless lawsuit that Buckeye filed against the Village in April 2016, which the Village countered with a persuasive and well-argued motion to dismiss. In June 2016, Buckeye informed the court it was withdrawing its original complaint and would be replacing it with an amended complaint by 6/15/16.

As you can see in the document filed yesterday, Buckeye’s new complaint heavily employs the race-card and what clearly amounts to bullying and intimidation aimed against the people of Tinley Park, particularly those participating in criticism and petitioning of their government.

Buckeye seems to be engaging in what amounts to a SLAPP with this lawsuit (Strategic Litigation Against Public Participation). If you read Buckeye’s 67-page amended complaint, you will see that the bulk of it targets citizens of Tinley Park for speaking out against the developer’s project at board meetings and on social media, picketing the Village in public protest, and exercising their protected First Amendment rights to petition and lobby their government for change and redress of grievances. Buckeye names Constitutionally protected Free Speech in opposition to its tax-credit scheme as the basis for filing its lawsuit. It can be argued that — since the true purpose of the lawsuit is clearly to punish members of the community for participating in the political process — this lawsuit is at heart a new twist on SLAPPs.

While Buckeye didn’t name any community activists as defendants in the lawsuit (as is typical in SLAPPs), Buckeye targeted two community activists by name in the body of its amended complaint in what reads like a purposeful smear campaign against them that is likely designed to discourage these individuals (Michael Fitzgerald and Ken Shaw of the Citizens of Tinley Park political action group) from further participation in local politics. It is a heavy-handed and brutally scary event to have your name dropped into the middle of a lawsuit, where your Constitutionally protected First Amendment activity is cited as a cause of the lawsuit and the implication made that you did something wrong by exercising your Free Speech rights. To smear individuals in Buckeye’s amended complaint as alleged racists for engaging in opposition to a shady tax-credit scheme cooked up by an out-of-state profiteering developer is a heinous abuse of our judicial system and should not be tolerated in America.

What Buckeye has done here should not be allowed to stand because this new twist on SLAPPs seems carefully constructed to achieve everything a SLAPP normally achieves (silencing targets such as Fitzgerald and Shaw) without allowing those targets to successfully defend against the SLAPP with the Citizen Participation Act (CPA). A situation now exists where Buckeye has arguably attacked Fitzgerald and Shaw as individuals but has left them with no means of defending themselves, as they were not named as actual defendants in the lawsuit. They were just aggressively smeared by name in a creative way that makes the despicable accusations of racism lobbed against them as part of the record but does not afford them any mechanism of battling back (as they would be able to, including countersuing Buckeye, if they were actual defendants).

Please imagine the ramifications of this if what Buckeye has done here to Fitzgerald and Shaw becomes commonplace. In that dystopian future, whenever a developer like Buckeye engages in a tax credit or other scheme that generates controversy and members of the public exercise their First Amendment rights to protest the development, entities like Buckeye will attempt to silence such Free Speech by name-dropping the protestors into litigation but not outright naming them as defendants so they could invoke the CPA and defend themselves.

The chilling effect of a SLAPP is achieved, since being name-dropped into litigation is as scary as being named a defendant and has the net effect of making the average person too scared and unwilling to have any further involvement in politics. The key difference is that if you are not actually named as a defendant, then you have no recourse and no ability to defend yourself and the entity like Buckeye that is attacking you just gets away with smearing you like that. Fitzgerald and Shaw must feel powerless and frustrated that their good names are sullied and our system appears to offer them no remedy or ability to clear their names as they would be afforded if Buckeye had SLAPPed them as named defendants.

In the rambling 67-pages of its amended complaint, Buckeye still mounts no valid argument for a legitimate lawsuit against anyone, let alone the Village, because Buckeye’s tax credit scheme has never been denied. Previous courts have ruled that a developer has no legal basis to sue a municipality if its project has not been denied as the controversy is not ripe until such a denial is actually made. A developer cannot prevail based on a theory of hypothetical or potential denial or because it feels a municipality is not moving fast enough to approve a controversial development project. On top of all this, Buckeye’s proposed development does not possess the street level commercial space required under Tinley Park’s Legacy Code zoning ordinance and Buckeye has seemed unwilling to redesign the project to include such street-level commercial space as required due to the fact that Buckeye’s tax-credit funding scheme would collapse if it complied with the commercial requirement in the zoning code.

The Village made these and other arguments in its motion to dismiss last month and it must have been effective, as Buckeye then decided to file this new amended complaint. However, Buckeye did not address any of the weaknesses or defects of its original complaint when the court gave it the opportunity to do so. This is telling because there appears to be no way for Buckeye to actually cure any of those defects.

Instead, Buckeye used the amended complaint to add Ken Shaw to the mix where previously it made Michael Fitzgerald the primary target of its SLAPP efforts. The fact that Buckeye went to the trouble of amending a complaint to add the name of another community objector to the mix in what reads like an intimidation effort underscores the SLAPP intent of what Buckeye is doing.

SLAPPs are not designed to succeed in court or make it beyond a motion to dismiss or into discovery. As seen with the SLAPP filed by former Orland Park Public Library spokesman Bridget Bittman at the encouragement of trustees like Diane Jennings at the Library, the SLAPP’s counts were dismissed by the judge or withdrawn by Bittman before she would have to face discovery (at which time her meritless accusations would have been exposed for the lies that they were). SLAPPers (what experts on SLAPPs call the plaintiffs who file SLAPPs) as a rule do not expect to win these lawsuits but instead file them to punish and intimidate people who engage in political protest or criticism of public bodies. Bittman is the granddaughter of the woman who used to own the Chicago White Sox and had access to funds provided to her by members of the American Library Association (ALA) to finance her SLAPP, as the ALA members expressed a belief that the chilling effect of Bittman’s SLAPP against community activists in Orland Park would benefit ALA members nationwide if it could discourage people from voicing opposition to the ALA in other areas too.

The Buckeye Community Hope Foundation has a business model dependent on tax-credit schemes in states like Illinois, where it can make immense profits by exploiting loopholes and gaming the system by slapping together controversial housing projects and calling anyone who opposes them a racist (using the well-worn and cliche Alinsky Methods tactic of accusing all public opposition to anything a housing developer does of secretly being racism). In our society, false accusations of “racism” are the ultimate weapon to use against an opponent and have a profound chilling effect on community opposition to a developer. Buckeye’s continued tax-credit schemes depend on communities being intimidated and frightened of opposing Buckeye in any way. For these schemes to continue, people need to be afraid of being sued if they speak out or — like Michael Fitzgerald and Ken Shaw — being despicably name-dropped into bogus SLAPP suits that are designed to make examples of them to chill the speech and discourage participation by future community activists who may have opposed Buckeye’s bullying elsewhere in the future (but who will now be frightened of doing so, because they do not want to end up like Fitzgerald and Shaw).

It is stomach-turning what the Buckeye Community Hope Foundation is doing with this amended complaint and disheartening that such a SLAPPer is able to abuse our court system as a political weapon to silence opposition. We hope that Michael Fitzgerald and Ken Shaw know that the American people do not believe the allegations being made against them and that every observer of SLAPP abuse can see clearly what Buckeye is doing and is offended by it.

When good men like Fitzgerald and Shaw are targeted for personal destruction by a scheming developer like Buckeye for exercising their Constitutionally protected rights and other good men and women stay quiet and do not speak out against what is happening, then we all suffer. 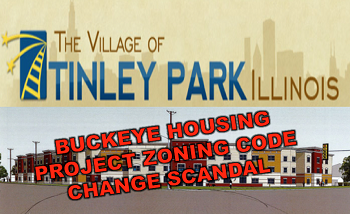