At the 4/19/16 Village of Tinley Park Board Meeting, Thomas Melody of Klein Thorpe Jenkins was removed as the Village Attorney and replaced by Patrick Connelly, of the firm Peterson Johnson Murray. This followed Item #26 on the agenda and a vote by the Board of Trustees to make the firm Peterson Johnson Murray the Village's new "corporate counsel" and "corporate counsel for labor."

Melody was named as a defendant in a lawsuit filed back on 3/22/16 by citizens of Tinley Park; the lawsuit alleges that Melody intentionally tampered with Tinley Park's Legacy Code zoning ordinance in a way that improperly removed language from the zoning code that was detrimental to an out of state developer named Buckeye Community Hope Foundation.

Buckeye sued the Village of Tinley Park on 4/19/16, alleging that the Village has improperly blocked its low income housing project and casting aspersions on residents of Tinley Park who have opposed the development project (which did not meet zoning code requirements for commercial development until the zoning code was tampered with to remove the commercial requirements in August and September 2015). A judge in chancery court is being asked to void all improper and illegal changes made to the zoning code last year. Cook County Sheriff Tom Dart is currently investigating the actions of Village Planning Department employees and the former Village attorney that resulted in changes made to the zoning code that immediately benefitted Buckeye specifically.

Buckeye's lawsuit against the Village has elements of a SLAPP (strategic litigation against public participation) to it, in that the lawsuit specifically cites community opposition to the project. Developers have long filed SLAPPs against communities that resist their development projects, particularly those involving shady or fishy behind the scenes actions that didn't sit well with the communities being strong-armed by the developers. As early as 2/2/16, high ranking Buckeye executive David Petroni had threatened a lawsuit against the Village if the Board did not buckle and do whatever Buckeye wanted...regardless of the bizarre circumstances in which the Legacy Code zoning ordinance had been tampered with to remove the specific obstacle to Buckeye's development plans and intended tax credit scheme.

Thomas Melody had continued to attend Village Board meetings and advise the Village despite being named as a defendant in litigation stemming from his actions regarding the zoning code change. This seemed like a conflict of interest to many. Melody also has been responding to Attorney General's office inquiries into violations of the Open Meetings Act that have consistently occurred at Village meetings since February, despite Melody also being present for all of the alleged OMA violations (and doing nothing to stop them as they happened).

Buckeye's lawsuit seems doomed if indeed, as expected, the judge in chancery court voids the zoning code changes and restores the Village's Legacy Code to the way it looked prior to the alleged tampered by Melody and Planning Department employees. If the code is indeed restored to once again have a street level commercial requirement for any development on Tinley Park's Oak Park Avenue, then Buckeye's lawsuit can't possibly succeed, as its propose housing project would clearly not meet the actual zoning code.

It is important to note that part of Buckeye's strategy seems to be to consistently paint all opposition to its project as racist and ignore the allegedly illegal and improper tampering with the zoning code that Buckeye relied upon to push forward this project. Conveniently this developer seems to play the race card as a distraction from the actions alleged to have been taken by Village employees to intentionally benefit Buckeye (which, if true, would be highly improper and illegal, as the citizens of Tinley Park lawsuit contends).

This case is an interesting one to follow as it promises more twists and turns.
.
Please consider a donation to the Edgar County Watchdogs.
[wp_eStore_donate id=1]
. 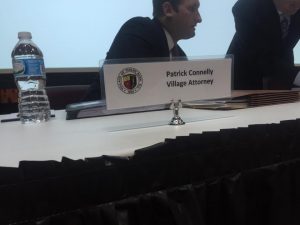