Correspondence between disgraced Tinley Park Planning Director Amy Connolly and embattled Village Manager David Niemeyer shows what appears to be a threat made by Connolly of a discrimination lawsuit against the Village after Connolly was put on paid administrative leave for her role in allegedly tampering with the Village's Legacy Code zoning ordinance.

Both Connolly and Village Attorney Thomas Melody (of the Orland Park firm Klein Thorpe Jenkins) are personally named in a lawsuit filed on 3/22/16 by citizens of Tinley Park in Cook County Circuit Court chancery division to have a Judge declare void all tampering to the zoning code that Connolly and Melody are alleged to have done in August and September 2015 to intentionally benefit the Columbus,Ohio-based Buckeye Community Hope Foundation. The lawsuit alleges that Buckeye needed the zoning code tampered with to remove the words "street level commercial required" and replace them with "street level commercial permitted" for Buckeye to be able to build a low income housing project in the formerly "commercial required" Oak Park Avenue Corridor of downtown Tinley Park. Buckeye's project, called "The Reserve," has never included the kind of street level commercial space that the Legacy Code zoning ordinance required (before it was tampered with in 2015, in what the lawsuit alleges was a deliberate act designed to specifically benefit Buckeye by removing the word "required" and altering it to "permitted" so $16 million "The Reserve" project could proceed).

A housing project in 2014 for senior living residential units by a developer called PIRHL without street level commercial space was not allowed to proceed because of the strict "commercial required" zoning code. The lawsuit alleges that Connolly and Melody intentionally tampered with the zoning code to allow Buckeye to succeed in 2015 where PIRHL failed in 2014.

A letter from Village Manager David Niemeyer to Connolly, dated 2/17/16, placed Connolly on immediate administrative leave, took back her computer and other Village issued items, and asked/barred Connolly from setting foot on Village premises. This disciplinary action was taken by the Village against Connolly when emails surfaced between Connolly and Buckeye that seemed to show improper collusion leading up to efforts to "clean up" the zoning code to clear a path for Buckeye to get its way where PIRHL was stopped. At multiple Board meetings in February and March 2016, thousands of Tinley Park citizens demanded an investigation into Connolly's actions, necessitating her suspension.

Connolly appears to have lashed out against the Village of Tinley Park on 2/25/16, when she raised the specter of a discrimination lawsuit based on a wild perversion of the Fair Housing Act. In Connolly's warped logic, she apparently believes the Village can be sued for placing her on paid administrative leave while it investigates Connolly's actions in allegedly tampering with the zoning code in improper and possibly illegal ways. Connolly claims that she has "been discriminated and retaliated against for lawfully aiding in the exercise and/or enjoyment of fair housing rights relative to the Reserve Project."

The problem with this absurd contention by Connolly is that it does not appear that her actions in removing the words "street level commercial required" and ultimately replacing them with "street level commercial permitted" in the Legacy Code zoning ordinance were lawful, according to the lawsuit filed against the Village. As Tinley Park's Planning Director, her job was not to aid an out-of-state developer by intentionally altering existing zoning code so that the developer's housing project could then slip through. Those actions are both at root of the lawsuit and the reason for Connolly's suspension and paid administrative leave.

On 3/22/16, the Village of Tinley Park appointed Cook County Sheriff Tom Dart as its official Inspector General and asked his office to immediately begin investigating the propriety and legality of all actions taken to alter the Legacy Code zoning ordinance.

This maneuver by Connolly in claiming discrimination may have spared her from being terminated outright, since she remains on paid administrative leave as of this writing. It appears the Village was frightened of a potential discrimination or wrongful termination lawsuit, which has allowed Connolly to sit at home and collect her full paycheck and benefits while the Village figures out their next move. During board meetings, repeated calls for Connolly's termination have been made by residents of Tinley Park who don't understand why the Village can't just fire her. Many ask what a public employee needs to do to lose her job in our state.

The next important date on the horizon appears to be 5/1/16, when the Village of Tinley Park announces its new budget and staffing for 2016. This is the day when apparently the Village will appoint high-ranking positions such as Village Manager and Planning Director, which appears to be an opportunity for the Village to decline to renew Amy Connolly's employment with the Village. A working theory amongst people following this matter closely is that perhaps the Village is keeping Connolly on paid administrative leave until the clock runs out on 5/1/16 and the Village can cut her loose without Connolly being able to make any sort of wrongful termination claim.

If that's true, then Connolly has found a clever way to keep getting paid and to maintain all of her platinum-plated benefits from 2/17/16 (the date she was placed on leave) until 5/1/16, the date that allegedly the Village has a clear window to potentially let Connolly go for good. 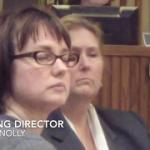