In a brief Special Meeting of the Village of Lerna Board of Trustees, held at 2:00 p.m. today, the trustees appointed a new village president.

After roll call, the (new) unconditional resignation of Don Pearcy was read aloud, and each of the trustees declined appointment to the vacant seat.

According to the Illinois Municipal Code, when a village of under 5000 people have a vacancy in the office of president or mayor, and all trustees either decline or fail to receive majority vote, on the vacant seat, then the village can appoint another resident as its president.

A motion was made, subsequent to all trustee's declination of appointment, to appoint village resident Mr. Wilbert Beals to the vacant village president seat. Motion was seconded, and a unanimous vote affirmed his appointment.

WCIA reported on this earlier this past week: here and here. 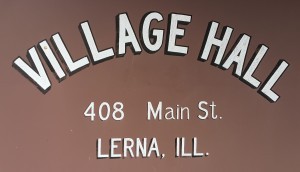