In Tinley Park (a southwestern suburb of Chicago), a local resident named Christy Heins has been caught on video harassing a reporter who has been covering the story about the local Village government engaging in shady and questionable dealings with zoning issues.

Megan Fox was the first reporter on the scene and has been filming a documentary of all the twists and turns at each Board or Planning Commission meeting. She has been interviewing local residents as more information keeps being uncovered that points to impropriety in Tinley Park's Planning Department.

We reported on Fox's ongoing documentary and findings so far here and here. You can watch her ongoing real time documentary, currently up to Episode 25, here.

Megan Fox has so far been the only reporter to address the corruption angle in this story, focusing her documentary on catching Tinley Park officials in lies and demanding answers from Board members about what they knew and when they knew it. Another government watchdog, Kevin DuJan, has also now caught the Village of Tinley Park in what appears to be several Open Meetings Act violations that are now being reviewed by the Illinois Attorney General's Office. These stem from the Village Board and its attorney (Thomas Melody of the firm Klein Thorpe Jenkins) demanding people who wished to speak during public comment give their names and addresses before they were allowed to speak on 2/2/16 and 2/4/16.

With a police officer standing by her side, a Village employee also demanded that anyone who spoke at the meeting write down their names and addresses on a clipboard when the Open Meetings Act does not allow for a government body to be doing this (let alone with an armed police officer intimidating the public while this is happening). Additionally, at the 2/4/16 Planning Commission meeting, the Village restricted the speech of people who wished to address the Board by not allowing the public to address questions, thru the village board, to the Village Planning Director Amy Connolly, who is a member of the Planning Commission. The OMA does not allow for a public body to restrict who the public wishes to address during the public comment portion of a public meeting.

If the public wanted to question Connolly, who was in attendance and a member of the Planning Commission, then the Village had no legal right to restrict speech and censor the public and prohibit anyone from asking Connolly questions. Connolly had the right to not answer questions and to not speak, but the Village appears to have violated the Open Meetings Act by telling the public it could not ask questions posed directly to Connolly.

Over the last few years, DuJan has successfully challenged the firm Klein Thorpe Jenkins in Orland Park, where the Attorney General handed down multiple determinations that the Village of Orland Park and the Orland Park Public Library had repeatedly violated the OMA and the Freedom of Information Act. Because of DuJan's watchdog efforts, both the Village of Orland Park and its Library were forced to remove illegal restrictions from their various policies that had made it harder for the public to obtain information or address concerns with these public bodies. It is likely that DuJan will prevail against the Village of Tinley Park and Klein Thorpe Jenkins here as well.

Clearly, the Village of Tinley Park's actions of late are a newsworthy story of great public interest, which is why Fox is covering the story. This is exactly the sort of reporting that local watchdog groups follow and Fox's ongoing documentary series has proved popular on YouTube.

Tinley Park resident Christy Heins, who is an Admin for a closed Facebook group restricted to just "real residents of Tinley Park" (whatever it means to be a "real resident" according to that group), attended the 2/16/16 Village Board meeting, after which she charged up to Fox and began shouting at her. A policeman had to intervene and ask Heins to stop. The video speaks for itself, as Fox repeatedly asks for Heins to back off and allow this reporter to do her job. Heins can be heard demanding to know where the reporter lives and harassing and intimidating Fox, which prevented this reporter from conducting the interviews with meeting attendees that she was filming for her documentary.

We have encountered this kind of phenomenon ourselves, almost everywhere we go, when we attend public meetings and report on public corruption around our state, where people like this Christy Heins character take it upon themselves to decide that "outsiders" are not entitled to participate in First Amendment protected activity on "their turf."

We question the true motives of anyone such as Heins who tries to silence a reporter or scare away or intimidate a watchdog from covering the activities of a public body such as the Village of Tinley Park and its Planning Commission.

Whether Christy Heins likes it or not, Megan Fox has the right to make her documentary and report on this story.

If you didn't know any better, it would make you wonder whose side someone like Christy Heins is on if she is trying to stop the documentary that is exposing all of the Village's bad deeds with this housing project debacle. Since the corrupt people in the Village also don't want their misdeeds being reported, it would appear that Christy Heins is on their side in also wanting to shut this documentary down. Was that her plan from the beginning? 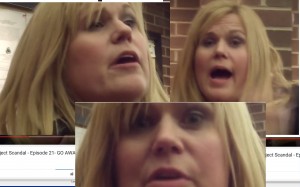