The College of DuPage held its regular Board of Trustees meeting tonight, and a quorum was present.

All trustees are present!

One of the first items on the agenda was swearing in the ICCB’s choice to replace former trustee Hamilton – David Olsen.

Trustee Wozniak attempted to comment prior to the oath of office and was rightfully denied by Chairman Mazzochi.

Video of swearing David Olsen’s Oath of Office and his statement to the public below: 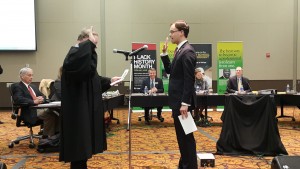