College of DuPage – “Breuder Board” vs. “Reform Board” – Part III

As a continuation to Part I and Part II, we will once again provide evidence as to why the ‘Breuder Board’ of McGuire, Birt, and Wozniak must be stopped and exposed.

McGuire is on a mission to become the next Chairman of the Board and bring back the days of Breuder, which would lead to re-joining the ICCTA and bringing back the past law firms.

Looking at the ICCTA, we don’t need to go much further than the articles in which we exposed the former President William Kelly in this article and this one, but we will.

The agenda for the upcoming special meeting points to reinstatement to the ICCTA, who we understand has been giving McGuire her legal advice in her attempts to take control at COD.

ICCTA is going to say or do what ever it can, if it means getting COD back on board as a member. You see ICCTA charges based on the size of your institution, so when COD did not renew its membership, that was a big hiccup in the ICCTA budget.

It is clear that Ken Florey’s law firm is connected at the hip with the ICCTA and in fact we have been told may even present their own opinion on whether trustee Mazzochi is the acting chairman or not during the upcoming meeting.  If the reports we are getting are accurate as it relates to the ICCTA giving their legal advice to McGuire, it would explain the agenda item to vote for new officers of the board.

Trustee Wozniak’s affinity to the ICCTA lies in the luxury travel he so enjoys at the taxpayer expense and the fact they gave him the “Trustee Education Award”, not once, but twice.  Not sure what it takes to get that award but most know Wozniak can’t put three sentences together and rarely speaks with any sense of intelligence.

We know McGuire’s affinity to them is the fact she uses the ICCTA conferences as a way to have the taxpayer pay for her vacation travel.  She simply schedules her vacation around the conference dates and presto, free travel costs!  The fact this little perk was restricted with the ‘Reform Board’ is a very sore subject with McGuire.

Sadly for her, having expenses paid for by the college for her husband’s travel with her is a crime, even though it appears to have been paid back.  ‘Use of public credit shall only be used for public purpose’.  She clearly doesn’t understand our constitution!

Another interesting twist with McGuire is she complained that Tim Elliot serving as the college legal council is a conflict because he is a trustee for the Village of Glenn Ellyn, which is in DuPage County. If that is the case then why no word on Ken Florey who was a village trustee of Lombard and currently a board member on the Police and Fire Commission, which also is in DuPage County?

Never mind the conflict created by Florey when he was sitting on the COD Foundation board.  Nope, McGuire seems to have had no problem with any of Florey’s involvements at COD.

Let’s now point to actual documents that most will agree spell out why Ken Florey should never be allowed to represent the college again.

As you read through the e-mail chain below, ask yourself this one question:  Why is it the obligation of the taxpayers to provide food and booze to Ken Florey and his wife?

May 15, 2014 Tuscany Wine Region Dinner at the Waterleaf

No Mr. Florey, it was not generous of Breuder as he never paid for it, the taxpayers did!

Any attorney worth their salt would see that it is improper to represent the school and accept a $75 dinner for him and his wife on the backs of the taxpayer.

The fact that Ken Florey was an active participant, along with his wife, should be more than enough for the citizens of District 502 to fight back against the ‘Breuder Board’ agenda being led by McGuire and Birt.

It is clear by simply connecting the dots that McGuire’s push to reinstate the ICCTA and Ken Florey have a common thread that must be cut. 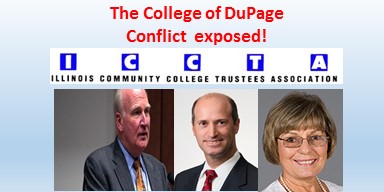