Paris, IL. (ECWd) -
That lawsuit filed after Taylor Smith left the Paris Beacon News was dismissed on all counts - with leave to refile.
In the Order, the Court determined Smith plead no Causes of Action on any of the three Counts.
Smith's Complaint contained Counts complaining of Retaliatory Discharge, Whistle-blower Protection, and Contract violations.
It alleged in Count One that he was discharged after complaining of activities he thought were improper on how the PBN collected advertising fees, in Count Two he also complained he was discharged for his complaints and that discharge violated the whistle-blower protection act, and finally in Count Three he alleged that his discharge violated an "oral contract" he allegedly had which would have been "help" in purchasing a newspaper that would gross $750,000 per year , after he worked at the PBN for one year.
He was seeking $50,000 in this complaint.
The PBN filed a Motion to Dismiss and it was granted on all counts with giving Smith leave to refile, 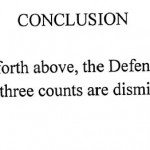